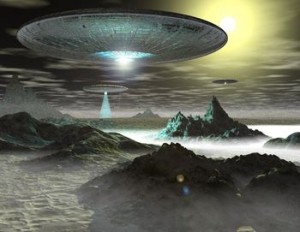 • Poland: Many witnesses in observe a silvery object, two hemispheres divided by a rotating ring. The object ‘shoots’ a beam of light, and then rises with a loud noise.

• USA, Nebraska, Hubbell: William C. Lamb was following strange tracks when he heard a high-pitched sound and saw a circular object intercepting starlight. It became brilliantly lighted and landed in a hollow. Soon afterward, a creature over 2.4 m tall was seen flying from the direction where the object had landed. It left tracks in the snow, which Lamb followed without results.

• Wales, Barmouth: John Morris and William James saw an object fall into the ocean so slowly that it was thought to be a plane. A boat was sent out, but nothing was found.

1923 Pakistan, Quetta: A UFO explodes in mid-air over Quetta. Flaming debris rains down, destroying a few buildings. The fire lasts for hours, leaving only melted slag and “thin wires.”

1924 Ireland, County Wexford: Two boys watched for several minutes as a solid beam of light several feet long traveled through the air a few feet from the ground. It moved at approximately 10mph, climbing a hedge and crossing a field, before encountering a railroad track and moving off along its length.

• Australia, Moora: Two teenagers stumbled upon a saucer-shaped shimmering object resting on four legs in a paddock near. They ran off in fear.

• Mongolia: During his expedition explorer Nicholas Roerich and members of his caravan, caught sight of a huge oval-shaped object high in the sky. It had a shiny surface that reflected the sun on one side and moved at great speed north to south.

• Romania: A cylindrical object flew over a Rumanian village at an altitude of 200-300 m from west to east. Smoke gray in color it was an estimated 15-20 m in length and had a diameter of 3-4 m. It was not illuminated and passed soundlessly.

• USA, California,Sausalito: Writer Ella Young said that while sitting outside the Madrona Hotel she saw ‘a cigar shaped craft shoot out of a cloud beyond the bay, and across the sky toward Tamalpais.’ It was not shaped like any airship she knew. ‘It was long and slender, of yellow color, and traveling at great speed… it seemed to progress by alternately contracting and elongating its body.’

• Canada, Fermeneuve: Levis Brosseau, 2O was returning home when he saw a dark object with a yellow light and his horse became very nervous. Within 6 m of the object four or five dwarfish figures were running back and forth. He heard their pointed, childlike voices, then saw the dark object take off with a machinelike sound and a rush of air. Estimated size of object: 15 m diameter, 5 m high.

• Canada, Robsart: Five persons among them Einar Rostivold, saw a huge ball of light giving off fiery colors, 25 km from Robsart. It landed slowly, vanished gradually after illuminating the whole countryside for 30 min.

• North Atlantic: Thomas Stuart, third mate of the SS Coldwater, reported that at 400 mile off the coast of Virginia he saw a light traveling at an estimated 100 mph toward Bermuda. ‘There was something that gave the impression that it was a large, passenger craft,’ he said, though investigation failed to show any airship or airplane on that course at that time.

1930 Australia. Small humanoid alien shows up at a farm in Mandurah, W.A., asking for water. Shot to death by terrified farmer.

1931 Tasman Sea: The late Sir Francis Chichester was on a flight across the Tasman Sea when what looked like a dull gray-white airship approached him. It was pearl-shaped, flashing brightly, periodically vanishing, re-appearing, accelerating and finally disappeared.

1932 USA, Ohio, St. Paris: A picture of George Sutton taken near mid-day shows an unidentified flying object over Sutton’s left shoulder in this photograph. A vintage automobile with a 1932 license plate on the front bumper is in the photo. Nobody has been able to account for the dark object seen this picture. It could not have been a street lamp, simply because there were no street lamps there at that time. There are no power poles or power lines visible anywhere in this picture.

• Australia, Queensland: Small disc hovers behind a house in Nambour, It is grabbed by a boy, who suffers itching and blistering on his hands as a result of grabbing the object.

• Scandinavia: The month of December saw the beginning of the Swedish ‘Ghost Flier’ Wave. It ended four years later with an accumulation of 1,000 reports that also covered neighboring Finland and Norway. Most sightings involved airplane-shaped craft and luminous phenomena, none identified.

• USA, Pennsylvania, Chrysville: A man observed a faint violet light in a field between this town and Morrestown. Walking to it, he found an ovoid object 3 m in diameter and 2 m thick with a circular opening similar to a vault door. Pushing it, he found the room full of violet light and observed many instruments, no occupant. Smell of ammonia.

• Canada, Saskatchewan: Three witnesses saw landed UFO at Nipawin, and watched several little entities in silver suits ascending and descending a ladder. Square imprints and burnt areas seen and photographed at the location the next day.

• Ethiopia, Addis Ababa: During the Ethiopian War a disc-shaped object hovered motionless in the sky above and was seen by many witnesses.

1936 Spain, Guipuzcoa: A sighting in the midst of the Spanish Civil War. English novelist and former soldier Valentine Williams and two others were driving from General Franco’s headquarters in Burgos to Biarritz, France. The sighting occurred at 4:18 pm in the Basque province of Guipuzcoa, about 75 miles from San Sebastian. Williams’ companions gasped in amazement; he turned to see what he thought was a flare or traced round on a course at right angles to the road, heading northward at an amazing velocity. Williams later described it as ‘like a streamer of white smoke… As it went, it burst into a bright orange flame. There was no sound or explosion.’ When they reached Biarritz, they told their story. Tom Dupree, from the British Consulate at Hendaye, said the had been at San Sebastian (about 30 miles west of Biarritz) at the same time of that day and had seen the same object. This UFO could have been a particularly large fireball, burning brightly enough to be visible by daylight. However, the accounts give the impression that the object was traveling paralleled to the ground, not falling towards the earth.

• Canada, Tabor: “Mysterious lights” hover over Tabor, Saskatchewan.
• Estonia, Juminda: Two observers watched a 1-meter long object that was greenish -brown in color until it finally disappeared.
• USA: The Orson Welles’ Radio Broadcast. H. G. Wells’ novel, War of the Worlds, was the first story of interplanetary warfare involving Earth. Before his story, previous tales described peaceful beings visiting Earth, but Wells’ aliens came with weapons and were ready to take over the Earth as their new home. These aliens, who came from Mars, had so much power that humans could not stand a chance against them (in the end a type of bacteria finally kills the aliens). As a direct result of this novel, people began to believe that that any alien invasion would mean the termination of mankind. Orson Welles with his Mercury Theatre on the Air broadcasted their version of Wells’ novel on Halloween night, 1938. It began at 8 p.m., and even before the broadcast was through, millions of people were frightened to the point that they cried, prayed, tried to rescue loved ones, and called upon ambulances and police. There was nationwide panic like never before. The people perceived this play as being reality because at the time radio was their most reliable source of news, and everything was portrayed so realistically. Also some of the specific places described, for example, street names, were real for many people. From this intense reaction, we can conclude that at this time in history, our culture believed that extraterrestrial life exists, and that aliens are capable of travelling to Earth by UFO’s to invade our planet.

• Japan: While flying over Japan, Wing Commander D.J. Blakeslee sighted an object he described as having red, green and white lights. The craft moved rapidly to escape detection. Blakeslee was guided by ground radar. He was reported to be stable and reliable. The Air Force officially ruled the sighting to be Jupiter, although it was tracked by radar.

• Germany: German aviatrix Hannah Reisch sees a UFO speeding by at an altitude of 66,000 feet.

• USA, Missouri, Cape Giradeau: Charlotte Mann states her grandfather, Rev. Wm. Huffman, told her about a UFO crash site story which occurred in July 1941 outside of Cape Giradeau. The Cape Giradeau police department and some military personnel were at what they thought was a plane crash site, but Rev. Hoffman said it obviously was not a plane. There was crumpled aluminum like metal debris scattered over the area and an object that was disc shaped. There were three humanoid bodies, child-like with large heads, big black eyes, no nose, slit for a mouth, and a form fitting uniform covered with debris. The MJ-12 cited this Missouri Ozarks 1941 UFO crash site story along with the 3 Roswell 1947 crash sites as recovered exhibits deemed extraterrestrial.