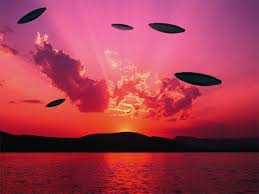 • Argentina, Tres Lomas: Two hunters saw a disk-shaped object resting on the ground 150 m away. It looked like an aluminium craft about 2. 5 m high, with a dome on top. Grass flattened.

• Australia, Goolwa to Port Elliot: Barry Neale was driving home when he saw on the ground a glowing, reddish-orange object with a row of portholes. It illuminated the trees, was about 5 m wide. He got within 300 m of it, and drove around the wooded area in time to see it take off. No radioactivity was found at the spot.

• Australia, Prince of Wales Island: Hunters reported the landing of a red object on the island. Other hunters saw a similar object near Karumba Lodge.

• Australia, Pumong: Near Claypans, 150 km northeast of Adelaide, Carl Towill, postmaster, and Percy Briggs, mail carrier, saw a dome-shaped object take off from a field 400 m away. It resembled a huge, brilliant circus tent, studded with lights that kept changing from red to blue. They approached within 200 m, then saw it rise, hover, and shoot off at immense speed toward the south. They had observed it for 10 min. Mr. Briggs was questioned by investigators from Woomera Rocket range.

• Canada, Fort William: On the Trans-Canada Highway west of this town, four hunters (Douglas Robinson, Ray Disguiseppe, Victor Arnone and John Defilippo, of Port-Arthur) saw an oval, luminous object follow their car about 13 m above them. The object was spinning, stopped when they did, was white in color and remained with them for nearly 50 km.

• Canada, Glenora: Approximate date. Miss G. Wilson, 14, was out riding a horse when a luminous object dived toward her, and she rushed home in fear. Her father came out and saw the object, which he described as orange and making a “painful” sound.

• Canada, Grassy Plains: Alex Gillis and Jerry Monkman saw from a hilltop an egg-shaped object in the middle of the road. It was about 5 m long, the top part emitting a bright light. The object went away silently. Fearing ridicule, the witnesses reported the incident one month later.

• Denmark, Svendborg: Between Svendborg and Nyborg, Ove Christensen, coming home after work on his bicycle, was stopped on the road by a disk-shaped object spinning at ground level. After five minutes it began chasing him, flying 6 m above him for 5 m. The object was luminous and seemed made of glass.

• England, Stratford-on-Avon : Leonard Hewins, of Tredington, saw a fiery, round object come down from the east and land 100 m away. While a blue haze formed, three figures emerged from the object and seemed to sit down with clumsy movements. The witness was unable to move until the craft and its occupants took off swiftly, leaving a trail of stars.

• Germany, Werdehl-Eveking: Near Hagen, Lutz Holtmann went toward a bright object in a forest, and fainted when he got close to it. When he regained consciousness, he saw it take off silently and vertically. It was round, had a tripod landing gear, two rows of bright openings, and was about 30 m in diameter.

• New Zealand, Blenheim: Mrs. Moreland saw a disk- shaped object as she was milking cows. It was about 10 m diameter, had two intense, green lights and two rows of jets around the rim, emitting orange flames. Inside a glass dome on top were two men dressed in aluminium-like suits. The craft did not land, but took off at great speed with a high-pitched sound. Heat sensation.

• New Guinea, Boianai: Many witnesses, among them Fr. W. B. Gill, head of a local mission, saw an orange object that hovered in mid-air. Four figures were visible on its “deck” and a beam of blue light was emitted upward from it. The object did not come to ground level, but its position above the ocean was almost on a level with the observers standing on the hill.

• New Guinea, Papua: Rev. W. B. Gill and his parishioners at Boianai mission are astounded when a flat saucer hovers overhead and four aliens wave to them.

• Poland, Kolobreg: On the Polish coast, not far from Kolobreg, soldiers saw the sea become turbulent as a triangular object, 4 m in size, emerged, circled the barracks, and flew away at high speed.

• South Africa, The Willows: A civilian woman observed a saucer-shaped object hovering 5 m above ground. It was bathed in an orange glow, similar to that of a dying fire. It flew away horizontally and was lost to sight behind a hill.

• Spain, Brion: A 60-year-old farmer saw an egg-shaped object come down at high speed and land in a pasture near a river. Then it took off vertically and flew away toward Santiago. Traces. Engine noise, not similar to helicopter.

• Tierra del Fuego, Sombrero: Mr. Uribe, a petroleum engineer, and two other witnesses had to stop when they ran out of fuel; they observed a light swinging like a pendulum, coming close to the ground. It appeared as a large, vertical, egg-shaped object which made a “whooshing” sound. Closest approach was 120 m. Estimated height: 2 m; width, 1. 5 m. When Uribe aimed a rifle at the object, it went out of sight within seconds.

• USA, Alaska, Umiat: 350 km east of Umiat, trappers saw a red, disk-shaped object less than 4 km away, going up and down, sometimes nearly touching the ground. It circled and went away.

• USA, California, Oakdale: Kenneth Lindsley and several other witnesses saw a bright, orange object at ground level. It was bowl-shaped, as wide as the road, and shadows that appeared to be moving could be seen.

• USA, Iowa, Cedar City: Private Gerry Irwin stopped his car to investigate what he thought was a crashing plane. He was later found unconscious. Sequels of the incident (fainting, amnesia and his return to the site in a trancelike state) are sometimes quoted as evidence of psychological experience correlated with the observation of the luminous object. Irwin deserted, and his subsequent whereabouts are unknown.

• USA, Kentucky, Wallingford: A bluish, disk-shaped object was observed at ground level by a mail carrier. It suddenly went away horizonally, leaving a stained ring on the ground.

• USA, Texas, Freeport: A bright, flying object passed low over a car, whose engine stalled, and landed in a wooded area. Six witnesses in two separate groups observed the object, and the police were called. The dense underbrush prevented investigation of the site.

• Canada June 18, 1959; Edmonton, Alberta, Canada. 9:30 p.m. Witnesses: A. Cavelli and R. Blessin, using 7x binoculars. One brown, cigar-shaped object came from below the horizon (close to the witnesses) ascending to 40-50^ above the horizon in 4 minutes.