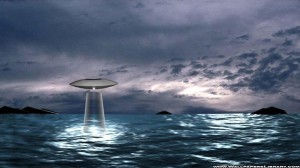 • Brazil, Bauru: A group of survey workers ran away as they heard a hissing noise and saw a disk land 50 m away. Jose C. Higgins saw two figures through, a window. Later three beings in shiny clothes and translucent suits, with oversized bald heads, huge round eyes, no eyelashes or eyebrows, and a metal box on their back, emerged from the craft. They were over 2 m. tall. They drew the solar system and pointed to Uranus as if to suggest that was their point of origin.
• Canada, British Columbia, Mallardville: Residents witnessed flashing discs streaking through the sky at noon-time on Sunday. Antoine Beauregard, painter, said he was working on a house during the afternoon and suddenly saw a shiny aluminum disc cross the sky. It was about 300 feet long.

• Hungary: According to the files of the USAF’s Aerospace Technical Intelligence Center, some 50 reports were made across Hungary of ‘silvery balls’ flying at great speed in the daylight.

• Italy: An Italian artist by the name of Rapuzzi Johannis was taking a leisurely walk in the mountains between Italy and Yugoslavia. He saw just in front of him a red glowing saucer. This saucer was about thirty feet wide and it was accompanied by two small dwarf-like creatures. These creatures had very large heads with green faces, sort of resembling that of a fish. They also had a circle around each eye. Apparently one of the creatures had hit Johannis with an electrical ray which left him very weak and almost paralyzed. After this incident the creatures ignored Johannis and left.

• Italy, Raveo: R. L. Johannis saw a disk on the ground and two dwarfs less than 1 m tall, wearing dark blue coveralls with red collars and belts. They had over-sized heads, greenish faces, huge, salient dark eyes without eyelashes or eyebrows, but surrounded by a ringlike muscle. They wore something similar to crashhelmets. The center of their belts projected a “vapor,” and the witness suffocated, feeling a strong electrical discharge. The creature had greenish hands with eight talonlike fingers.

• USA: A letter dated 23 September 1947 from Lt. Gen. Nathan F. Twining, Chief of Staff of the U. S. Army to the Commanding General of the Army Air Force establishes of a study of flying saucers to be called Project Sign, and assigned a high priority in a letter dated 30 December 1947 from Maj. Gen. L. C. Craigie.

• USA, Arizona, Bisbee: John A. Petsche, electrical worker and another witness independently saw a disk-shaped object, which seemed to land near Tintown.

• USA, Arizona, Grand Canyon: A Navy lieutenant was flying at 9000 m toward the south, near Williams Field, when he saw two circular objects diving at “unconceivable” speed. They were gray, about 3 m in diameter, and appeared to land 40 km south of the Grand Canyon.

• USA, California, Muroc, Dry Lake, now Edwards Air Force Base: Four witnesses: 1st Lt. Joseph McHenry, T/Sgt Ruvolo, S/Sgt Nauman, and Miss Janette Scotte watched for an unstated length of time while two disc-shaped or spherical objects, silver and apparently metallic, flew a wide circular pattern, and then one of them later flew a tighter circle, moving about 300 mph at approximately 8,000 feet.” More officers gathered as a third object came into sight. A test pilot had reported seeing a round object at about 12,000 feet the day before.

• USA, Colorado, Manitou Springs: A silvery object was seen approaching from the northwest toward Manitou Springs on May 19. It halted, remained motionless for some minutes, and then started performing complex aerobautics. It rose and flew out of sight, against the wind.

• USA, Idaho, Twin Falls: Two boys and their father saw a sky-blue object in the Smoke River Canyon 100 m away and 25 m above ground. Treetops under it were spinning wildly, although the object itself did not spin. It made a swishing sound. Shape: inverted plate, 7 m diameter and 3.5 m thick. There was a red flame on one side of the top.

• USA, Nevada, Lake Mead: While cruising at 6,000 feet, US Air force pilot Lieutenant Armstrong witnessed six discs flying in formation.
• USA, New Mexico, Roswell: The celebrated Roswell crash in July of 1947 is the most famous case of government mismanagement and cover-up. Many versions of the crash exist, but many parts remain constant. A UFO crashed on a ranch just outside of Roswell, alien bodies are discovered, and the news sources reported put out a report that the government had captured a flying saucer. The next day, the military issued a report denying the claims and stating that the debris recovered was from a weather balloon.

• USA, North Dakota, Fargo: Lt. George F. Gorman of the North Dakota National Guard was approaching Fargo, flying an F-51. The tower called his attention to a Piper Cub which he saw below him. As he prepared to land, suddenly what he took to be the tail-light of another plane passed him on his right, but the control tower assured him no other planes were in the area. Chasing the light, he got within 1,000 yd. of it. It had been blinking but suddenly became steady and started to move rapidly with the F-51 pursuit. There followed a complicated chase in which Gorman had to dive on one occasion to avoid collision. Suddenly the light began to climb and disappeared. The Air Weather Service provided an analysis which indicated that Gorman had been chasing a lighted balloon.

• USA, Oklahoma, Yukon: A salesman eported seeing six strange objects in the sky at dusk. ‘They appeared as large as washtubs, and were very high up, flying in formation and at an incredible speed.’

• USA, Oregon, Portland: Excitement was generated by the report of the first UFO photograph from Portland, Ore. This was later identified as a weather balloon, but only after the picture had been given newspaper publicity.

• USA, Texas, Houston: Eastern Airlines DC-3, pilot Clarence S. Chiles and co-pilot John B. Whitted, were on a regular run from Houston to Atlanta, At 2:45 a.m. they saw a bright light dead ahead coming rapidly toward them. They pulled to the left to avoid a collision. Looking back they saw the UFO go into a steep climb. The pilots described it as a wingless B-29 fuselage and said that the underside had a deep blue glow.

• USA, Virginia, Richmond: Meteorologist Walter A. Miczewski and his staff at the US Weather Bureau in Richmond, Virginia, were tracking a weather balloon with a theodolite. They then noticed a silver disk, flat bottomed, with a dome on top, crossing the sky from east to west. The object was larger than the balloon and was tracked for about 15 seconds before it was lost to view.

• USA, Washington: A silvery object was reported to have fallen out of the sky and disintegrated over Washington state on May 5.

• USA, Washington, Mount Rainier: Kenneth Arnold was on an aerial search for a crashed C-46 marine transport plane when he saw 9 objects flying in formation. He estimated their speed at 1,300 to 1,700 miles per hour, distance at 23 miles and length of formation to be 5 miles. Also in the air at the time was a DC-4, which Arnold used as a point of reference to estimate the size of individual discs. He estimated the size as two-thirds the size of the DC-4. This sighting was not corroborated by radar or witnesses but did attract media attention and public interest.

• USA, Washington, Spokane: Eight disk-shaped objects the size of a house, were seen flying at 1000 km/h. A civilian woman stated that the objects fell with a dead leaf motion and landed before ten witnesses on the shore of the Saint Joe River, in Idaho.

• USA, Washington, Tacoma: Harold A. Dahl and others allegedly saw six tire-shaped objects, 30 m in diameter, metallic with dark openings, over Puget Sound near Maury Island. One of the objects exploded, showering the witnesses with metal. Officially regarded as hoax.

• USA, California, July 6, 1947; Fairfield-Suisan Air Base, California. Daytime. Witnesses: Army Air Forces Capt. and Mrs. James Burniston. Watched for 1 minute while one object having no wings or tail rolled from side-to-side three times and then flew away very fast to the southeast.

• USA, Idaho July 9, 1947; Meridian, Idaho. 12:17 p.m. PDT. Witness: Idaho statesman aviation editor and former (AAF) B-29 pilot Dave Johnson. Watched for more than 10 seconds from an Idaho Air National Guard AT-6 while a black disc, which stood out against the clouds, made a half-roll and then a stair-step climb.

• USA, Maine July 3, 1947; Harborside, Maine. 2:30 p.m. EDT. Witness: astronomer John Cole of South Brooksville, Me. Watched 10-15 seconds while ten very light objects, with two dark forms to their left, moved like a swarm of bees to the northwest. A loud roar was heard.