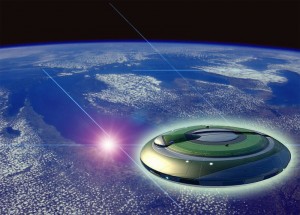 • Canada, Sherbrook: Mrs. Orfei heard a knock at the door in the middle of the night and obtained no answer when she asked who it was. When more furious knocks were heard, her Alsatian dog jumped toward the door, but suddenly retreated, trembling as if terrified and retired to a corner. Mrs. Orfei went to an upper door and saw two “indescribable” shadows go away from the house. A while later a big, round object took off 100 m away with a blue-green lightning. The police found broken bushes as evidence of an enormous weight.

• Denmark, Brovst: Brovst was the scene of an attempted abduction of a girl by two humanoids emitting a golden light. Their hands were rugged and cold like a fish. |

• France, Tonnerre: A woman saw two objects on the ground and three 1.5-m-tall men running toward the craft. They had oversized heads and wore helmets and boots. One entered the elongated object, 5 m long, 1.5 m wide, which spread “wings” that made it look like a butterfly. It then took a vertical position, resting on a tripod, and took off with the spherical object into which the other two creatures had gone. Traces were found at the spot.

• Mexico, Ciudad Valleys: Approximate date. Cab driver Salvador Villanueva, 40, observed two creatures 1.2 m tall wearing coveralls with wide, shiny, perforated belts, metal collars, and small, black, shiny boxes on their backs. They had helmets under their arms. The witness thought they were pilots of Indian race. One of them spoke to him in Spanish, “stringing the words together” in a strange accent. Trivial matters were discussed until dawn, when they returned to their craft, 13 m in diameter, through a staircase under the lower disk. The witness ran away when invited to follow them. The object rose with a pendulum motion and shot up vertically.

• Norway, Gjasjoen Bridge: Mr. Trygve, Mrs. Bufflot and a neighbor saw an object rise from behind a hill, oscillate over a lake, follow their car, and stop ahead of them just above the ground. They stopped, felt “pricklings” until the craft took off vertically. A watch stopped working, and numerous people vouch for the fact that the paint on the car changed from dark beige to bright green.

• Poland, Wolin: A metallic object 30 m in diameter was observed by five Polish and two German workers as it landed in a field close to a railway. It was shaped like a sphere with a flat disk around it, showing numerous openings at the periphery.

• Spain, Villares des Saz: Approximate date. An illiterate boy cowherd, Maximo Munos Olivares, 14, saw a “big balloon” on the ground behind him when a faint whistling attracted his attention. Shaped like a water jug, it was metallic. Through an opening came three dwarfs 60 cm tall, with yellow faces, narrow eyes, and oriental features. They spoke in a language he could not understand. They were dressed in blue, had a sort of flat hat with a visor in front and a metal sheet on their arms. One of them smacked the boy’s face, then they reentered the machine, which glowed very brightly, made a soft whistling sound and went off “like a rocket.” Footprints and four holes 5 cm deep forming a perfect square 36 cm in side were found by police.

• USA, California, Brush Creek: Two miners, John Q. Black, 48, and John Van Allen, reported that an object, silvery, 2.5 m in diameter, 2 m thick, with a tripod landing gear, landed on a sand bar 50 m away from them. An occupant described as a broad-shouldered dwarf wearing clothing that covered the head and the trunk was also seen. His arms and legs were covered with tweed like cloth fastened at the wrists and ankle. He filled a shiny pail with water and handed it to someone inside the craft. He then appeared to notice Black and jumped into the craft, which made a hissing sound and departed.

• USA, New Mexico, Santa Fe: Jim Milligan, 16, was driving through a park when he saw something fall in front of his car and stopped as the object landed in some bushes. He walked toward it, found a craft that looked like two ship hulls, about 3 m long, 2 m wide glued together. When he tried to touch it, the object flew away.

• USA, New York, Hampton Bay: A civilian woman saw something like “a large aircraft” flying very slowly and low. It had a lighted red band around the middle and was coming straight toward her house with an oscillating motion. She still thought it was an aircraft of some new design when it stopped near her, 25 m above ground. Then it flew backward over the water and hovered, making the same noise as a swarm of bees. The top section supported a series of red lights and a cabin with four portholes through which a control panel was visible. No occupant was seen. The cabin rose above the object, rotated, then glided back. The object tilted toward the west and rose toward the southeast, disappearing within 3 sec at an 80 degree angle of climb after the 3-min sighting. Diameter: 30 m. Two days later a yellowish moss was observed at the site.

• USA South Carolina, Conway: Hearing a commotion in his barn, a farmer observed an object about 7 m long and 4 m wide at treetop level. It was light gray in color and lit up inside. It resembled a half egg. The witness fired his gun at the object. Numerous livestock died “mysteriously” in the area after the sighting.

• USA, Texas, Houston: Howard Phillips, Hilda Walker and Judy Meyers saw in a garden at 118 East Third Street a strange “shadow” on the lawn which resembled a “flying man,” and they watched it take off.

• USA, Virginia, Quantico Marine Base: Marines observed the landing of an unknown round object which throbbed and pulsated, emitting red lights.

• Bonin Islands June 24, 1953; Iwo Jima, Bonin Islands. 11:30 p.m. Witnesses: crew of USAF KB-29 aerial tanker plane. Radar tracked an unidentified target which twice approached to within .5 miles of the airplane, and once to within 6 miles, during a 2 minute observation.

• USA, Arizona Feb. 4, 1953; Yuma, Arizona. 1:50 p.m. Witness: U.S. Weather Bureau observer Stanley Brown, using a theodolite. One white, oblong object was tracked flying straight up, leveling off and being joined by a second, similar, object. The second twice flew away and returned to the first. After 5 minutes, both were lost to sight behind clouds.

• USA, California Jan. 10, 1953; Sonoma, California. 3:45 p.m. or 4 p.m. Witnesses: retired Col. Robert McNab, and Mr. Hunter of the Federal Security Agency. One flat object, like a pinhead, made three 360* right turns in 9 seconds, made abrupt 90* turns to the right and left, stopped, accelerated to original speed and finally flew out of sight vertically after 60-75 seconds.

• USA, Georgia Jan. 28, 1953; Albany, Georgia. No time given. Witnesses: radar maintenance personnel. Radar tracked one stationary target for 20 minutes. A visual sighting about the same time was explained. No further information in the files.

• USA, Michigan Feb. 17, 1953; Port Austin. Michigan. 10:04 p.m. Witnesses: two officers and three airmen of USAF AC&W squadron, visually and by radar. Visual object appeared to larger and brighter than a star and changed color; it was seen to move slowly for 5 minutes until 10:09 p.m. Radar picked up a target at 10:08 p.m. moving in a similar direction for 17 minutes, at similar speed.

• USA, New Jersey March 11, 1953; Hackettstown, New Jersey. 4 a.m. Witness: Mrs. Nina Cook, an experienced private pilot and wife of a Pan Am flight engineer. A large light, blinking at 10-15 times per minute, moved up and down along a mountain range.

• USA, Texas Aug. 3, 1953; Amarillo, Texas. 12:04 p.m. Witness: Airport control tower chief C.S. Brown. One round and reflective or translucent object flew straight, stopped for 7 seconds, sped along, stopped again, was joined by a similar object and they flew off in different directions, after a total of 56 minutes.

• USA, Washington Jan. 8, 1953; Larson AFB, Washington. 7:15 a.m. Witnesses: men from the 82nd Fighter-Interceptor Squadron, including the squadron commander; all were on the ground. One green, disc-shaped or round object flew southwest for 15 minutes, with a vertically bobbing motion and sideways movements, below clouds.