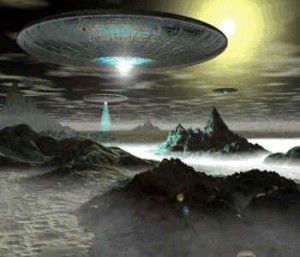 1903
• France, Argenteuil: At 11:00 pm, M. Desmoulins and four others saw a red object travel over 4 miles in 20 minutes. Seen through field glasses, the object did not appear to be a balloon.
• USA, Kansas, Iola: Large alien seven feet tall with long hair, horns and huge bulging eyes appears and is chased away by coal miners.

1904
• Korea: “Three objects appeared beneath the clouds, their color a rather bright red. As they approached the ship they appeared to soar, passing above the broken clouds. After rising above the clouds they appeared to be moving directly away from the earth. The largest had an apparent area of about six suns. It was egg-shaped, the larger end forward. The second was about twice the size of the sun, and the third, about the size of the sun. Their near approach to the surface appeared to be most remarkable. That they did come below the clouds and soar instead of continuing their southeasterly course is also curious. The lights were in sight for over two minutes and were carefully observed by three people whose accounts agree as to the details.” A sighting by the U.S.S. Supply off of the eastern coast of Korea, as reported by then Lt. Frank H. Schofield, later to become Commander-in-Chief of the Pacific Fleet.
• USA, Indiana, Rolling Prairie: Tom Darby, with his brother and mother, saw two whitish-blue objects about 400 m away, from a point situated 3 km north of Rolling Prairie. The objects hovered 2 or 3 m above ground, flew toward a barn, came closer to each other, and were hidden from view by a hill.

1905
• France, Cherbourg: First sighting of an oval, reddish colored object that hung in the sky over this northern French port until April 11th. It was not in the position of the planet Venus, and was not reported from other towns.
• Rumania, Bucovina: During the evening a retired doctor saw a brightly glowing elongated, saucer-shaped object bigger than the moon traveling steadily westwards.
• USA, California, Silshee: At 1:30 am, J.A. Jackson noticed a bright light heading toward him in the sky. The lights was also seen by the postmaster at the nearby town of Imperial. As the light neared him, Jackson made out the form of an ‘airship’ (although it had no gas balloon), showing several lights and apparently propelled by flapping wings.
• USA, Oregon, Portland: A buzzing UFO descends from heavy overcast and flies over Oregon.
• Wales, Llangollen: Several witnesses saw a dark object in the sky that, observed through binoculars, had short wings and legs, and moved ‘casually inclining sideways.’ It reminded some witnesses of ‘a huge winged pig, with webbed feet.’

1906
• Canada: In the North Atlantic, NE of Newfoundland, deck of the ship St Andrew. “I saw three meteors fall into the water dead ahead of the ship one after another at a distance of about five miles. Although it was daylight, they left a red streak in the air from zenith to the horizon. Simultaneously the third engineer shouted to me. I then saw a huge meteor on the port beam falling in a zigzag manner less than a mile away to the southward. We could distinctly hear the hissing of water as it touched. It fell with a rocking motion leaving a broad red streak in its wake. The meteor must have weighed several tons, and appeared to be 10 to 15 feet in diameter. It was saucer shaped which probably accounted for the peculiar rocking motion. When the mass of metal struck the water the spray and steam rose to a height of at least 40 feet, and for a few moments looked like the mouth of a crater. If it had been night, the meteor would have illuminated the sea for 50 or 60 miles.”
• China Sea: Giant luminous wheels were seen by a British steamer.
• USA, New York, Syracuse: “Mystery meteor” performs weird aerial maneuvers.

1908
• Bulgaria, Sofia. A very bright spherical object flew slowly above a square one afternoon.
• Denmark: Many reported sightings of an ‘airship’ – ‘an object with lights and wings’ – were made in the skies over Denmark. Some commentators claimed that the object had been launched by British warships which were known to have been on exercise at the time in the North Sea.
• Siberia: A mysterious fireball exploded over Tunguska in Siberia, creating shock waves felt miles away and setting 1,200 acres on fire. In 1927, Russian scientists first visit the sight of the blast. They find no meteorite fragments, but discover unusually high levels of radioactivity in the Tunguska soil. Speculation centers on the theory that a crippled alien spacecraft’s nuclear reactor exploded on impact. This incident is thought to be the first modern crash by alien spacecraft.
• USA, Coast of Delaware: The English ship “Mohican,” piloted by Capt. Urghart, was going to Philadelphia when it was surrounded by a thick, luminous cloud which “magnetized” everything on board. The compass was observed to swing wildly. When seamen tried to move some chains on the bridge, they found that they were glued to the metal floor. Suddenly the cloud rose and was seen above the sea for some time.
• USA, Massachusetts, Bridgewater: A spherical black UFO with a brilliant spotlight hovers and flies over. Seen by John E, Flynn, Philip S. Prophett and others.
• USA, Washington, Tacoma: Between 7:00 and 9:00 pm on this and the following night, a reddish cigar-shaped object ‘two or three times as bright as Jupiter’ flew over Kent, Washington; the same week, colored lights and a rocket were seen ‘at high altitudes’. Some newspapers proposed that a Japanese spy device was involved.

1909
• Annam, Donghoi: An elongated object following a west to east trajectory flew over the town. It gave off a strong light and was seen by two fishermen to plunge into the sea 6 km away from the coast, after a steady flight of about 9 min.
• England: Mystery airships seen almost exclusively at night, once again visited many parts of Britain. Mostly described as oblong in shape and equipped with a large searchlight, the craft was capable of propelling itself through the air at great speed.
• England, Peterborough, Cambridgeshire: The first mystery airship – or ‘scareship’, as it has since become known – was seen in Peterborough, Cambridgeshire, by two police officers in different parts of the city, at 5:10 am on March 23rd. A long oblong body with a light attached passed overhead at speed, making ‘the steady buzz of a high power engine.’ After a six-week long invesitgation, a Peterborough police spokesman claimed that the officers had seen an illuminated kite.
• Persian Gulf: Objects described as rotating wheels, which could go under water were sighted and a Danish captain.
• New Zealand, Dunedin: On July 28, an airship apparently came down over the city of Dunedin. A resident in the North Eastern Valley reported that he was awakened by a horrible noise at about two o’clock this morning,’ he told a reporter. “The noise was like a ship dragging her anchor up or a windlass of a steamer with dry-gear wheels working. I got up and went round to the front and I saw something floating up past Knox College. It was a great black thing with a searchlight attached.'”
• New Zealand, Fairfax: The afternoon of July 31, 1909, a resident reported seeing an airship while he was at Akatore. At 4:55 p.m., he saw a dark object shoot over the brow of the hills in the east and rapidly climb towards the west. He got a side view of the object which he described as cigar-shaped but bulkier, with a box-like structure underneath in the centre.
• New Zealand, Gore: Early the morning of August 1, a resident of Grosvenor Street in Dunedin reported seeing an airship. At one stage, he saw a bright yellow light shoot up what looked like a mast and stay at the top.
• New Zealand, Greenvale: On July 31, there was a UFO incident during the early morning hours at Greenvale, near Gore, South Island. While feeding the horses, a Greenvale farmhand heard a strange whirring sound, which frightened the animals. On looking out, he saw an airship overhead about 150 feet long. It had head and taillights and was moving so fast that, when he woke up his mates, the lights were faint in the distance.
• New Zealand, Kaka Point: New Zealand was repeatedly visited by UFOs, then known as “airships”. On July 24, 1909, some half dozen boys were playing on the beach at Kaka Point saw a huge illuminated object moving about in the air. It appeared as if it was going to alight at Kaka Point. The light from it was distinctly reflected on the roof of Mr. Fitzgerald’s cottage. The boys thought it was being attracted by their lantern and left it on the beach. The airship then glided around the rocks at the old pilot station and nearly came in contact with them. It shortly afterwards disappeared. The boys said it was as big as a house.
• New Zealand, Kaitangata: On Sunday night July 25, the mysterious object again made its appearance at the beach and was seen by Mr. George Smith and Mr. Poulter about 8:30. Mr. Smith viewed it through a very powerful night glass. It was apparently over Mr. Aitkenhead’s house when he first saw it, but it glided high in the air and sailed north in the direction of Kaitangata, swooping west and east and finally disappearing over the horizon. About 10:30 Mr. Smith was called out by Mr. Poulter to see the airship, which again had made its appearance. This time it headed out to sea and eventually disappeared. As seen through the glass, Mr. Smith said it appeared to be a fair size, dark superstructure with a powerful headlight and two smaller lights at the side.
• New Zealand, Kelso: On July 23, a small group of schoolchildren and some residents reported that an airship came down and bobbed around in the sky over the school for a few minutes.
• New Zealand, Lambourne: On July 27, about 10 a.m., Mr. Allan Mitchell and Mr. Alex Riach, while working at Lambourne near the mouth of the Pomehaka River, saw high in the air a large boat-shaped structure floating in the air.
• New Zealand, Oamaru: On July 19, three residents of Oamaru, reported “a flickering light” moving about in the sky.
• USA, Massachusetts, Worcester: Witnesses reported rays proceeded from a lamp about the size of the searchlight of an automobile. As it came nearer it was apparent that the lamp was attached to a large black object, but the machine was so high that its form could not be distinguished.” The object circled around Worcester, moved west to Marlborough where it was also observed and then returned to Worcester where it hovered for a time over an insurance building before leaving the area.
• Vietnam, Dong Hui: Fishermen located at the port city of Dong Hui; saw an elongated brightly lit object flying over the community for nearly ten minutes. It then disappeared after plunging into the sea of the cost.
• Wales, Caerphilly: Mr. Lethbridge was walking along a road near the mountains when he saw on the grass a large tubelike machine. Aboard were two men wearing furs and talking excitedly in a language the witness could not understand. The grass was found depressed at the site after the object had flown off.