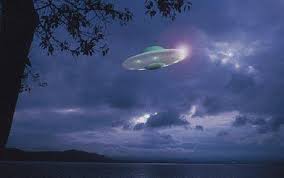 Antarctia R. J. Villela, a meteorologist in Antarctica saw a fireball-like object in low-level flight on May 16.

• Brazil, Paracuru: Raimondo dos Santos saw two craft land on hill near a farm called Capin Acu. He went near them and saw several small beings, pale-looking, making friendly gestures. He ran away. The creatures wore blue uniforms and white helmets. The previous day at 1900, over 100 witnesses had observed a dark-gray, circular craft, 20 m in diameter with a powerful light, maneuvering and hovering.

• England, Chinthurst Hill: Vera Bowden, 35, saw a gray, elliptical object hovering at tree height over Broadwater Lake for 18 min. Then it left toward the west.

• England, Warminster: Four witnesses, among them three military men, saw an object that seemed about to land, then took off again toward the north, leaving a trail of sparks and blinding them.

• France, Carignan: A dog barking at a glowing object resting in a park. Three witnesses observed it from separate locations. It appeared as an oval, luminous craft, 4 m in diameter, inside which vague shadows were seen. It took off toward the north. A circle of yellowed grass was found at the site.

• France, LaLonde: Remi Carbonnier, 45, was awakened by a green light illuminating his room. He went to the window and saw a bright, round object, 6 m in diameter, resting on three legs on the railroad tracks 300 m away. It was emitting orange flashes. A dome on top of the object started spinning, the legs disappeared, and the object rose vertically above the trees, without noise. Less than 20 sec later, it had cleared the hill and was lost to sight in the southwest. The next day the witness went to the site and found no trace, but his dog turned around and ran away.

• Germany, Hamburg: Mrs. K. St. Bereits was in her garden when she saw an object coming down at great speed. Arriving at ground level, it came toward her, appearing as a disk standing on edge, 7 m in diameter with a pulsating halo of yellow light. Three beams of light came from a central opening. A sort of haze and “gas stream” was also described.

• Greenland, Thule: On October 5th 1960, a formation of UFOs was seen by early warning radar in Thule, Greenland with a heading that seemed to be coming from the Soviet Union toward the United States. Within minutes, Strategic Air Command crews around America were scrambling to their nuclear weapons laden B-52s and taking to the skies. When SAC Headquarters signaled Thule for further confirmation, their calls were answered with silence. Had Thule already been taken out? Anxious moments as the Generals prepared to send the B-52 crews to their targets inside Russia, when suddenly the radar blips changed course and disappeared.

• Italy, Siracusa: Salvatore Cianci, jeweler, and his wife, were driving near this Sicilian town when a creature about 1 m tall appeared in the headlights. It wore a shining coverall and a diving helmet and had two short wings. Mrs. Cianci suffered from shock. (FSR 64, 4).

• Labrador: A Canadian ship reported that a cylindrical object with lighted portholes came down, hit the ocean, and sank off the north coast of Labrador.

• Mozambique, Beira: An orange disk landed with a hissing sound, then exploded, while four dwarfish figures ran away into the brush.

• Spain: The staff of Majorca Observatory recorded a triangular UFO about 1/4 apparent size of moon sighted at 9:33 AM, spinning on its axis while on steady course on May 22.

• USA, California, Red Bluff: On August 13, Officers Charles A. Carson and Stanley Scott of the California Highway Patrol were on patrol near Red Bluff about 11:50 p.m., when they saw a large illuminated object apparently falling from the sky. Thinking it was an airliner crashing, they quickly stopped and leaped out of the patrol car to get a position fix. “The first thing we noticed was an absolute silence,” Carson stated in his official report. “We continued to watch until the object was probably within 100 feet to 200 feet off the ground, when it suddenly reversed completely, at high speed, and gained approximately 500 feet altitude. There the object stopped. It was an oblong or elliptical object with a definite red light at each extremity. In between the red lights, about five white lights could be seen occasionally. The object was capable of moving in any direction. Up and down and back and forth. It moved at high (extremely) speeds and several times we watched it change directions or reverse itself while moving at unbelievable speeds.” Carson and Scott talked with several deputies at the Tehama County Sheriff’s office who had also seen the UFO and observed the same maneuvers. The sighting lasted a little over two hours. The UFO was estimated to be about 150 feet in its longest dimension.

• USA, Louisiana, Lacamp: Mr. Arnold saw a round object, fiery red in color, arriving at high speed from the south. It touched the ground about 300 m away with a loud explosion heard by many people, and a flame. It bounced in an easterly direction for about 300 m, then rose again, turned west and disappeared. The ground was scarred in nine places, and a substance resembling metallic paint was found.

• USA, New York, Syracuse: An electronics engineer was fishing when he heard a shrill, whirring sound and saw a round object, with a rotating light on top, land on the shore. The sound gradually stopped, an opening became visible, and two dwarfs with oversized heads came out with a hose and pumped water from the river. Later they appeared to play like children. Their bodies glowed with lights of changing colors.