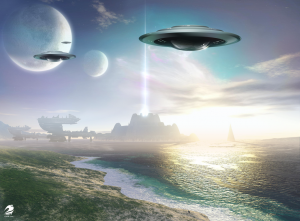 • Japan: An Imperial Japanese Sally bomber aircraft, on a mission over the Sea of Japan, was approached by a small dark spherical object which flew around and between the aircraft in the formation. An alert gun-cameraman snapped one photograph.

• Solomon Islands: While in the Solomon Islands US Marine Corp Sgt. Stephen J. Brickner sighted a staggering number of UFOs, laid out in virtually an enormous rectangle. They were in rows of 15 objects long by ten objects deep. The formation was 15 craft long and 10 deep. Formation sightings have been reported before but the rectangle shape is unique.

• Timor Sea: The cruiser Tromp was approached by a large aluminum disc that flew at tremendous speed. It then circled the Dutch vessel for about three to four hours. Finally, it flew off at an estimated speed of 3,000-3,500 mph.

• USA, California, Los Angeles: A gigantic black-out, covering the area from Bakersfield south to San Diego and eastward to Boulder City and Las Vegas, Nev., went into effect shortly after 8 o’clock last night on orders from the Army Fourth Interceptor Command. It continued until 11:03 p.m. As Los Angeles went dark amongst considerable confusion and uncertainty, The Interceptor Command announced, “this is not a practice black-out.” A yellow signal, indicating the approach of enemy air raiders, was flashed on the state-wide teletype at 7:35p.m.. Police said the signal indicated the presence of unidentified airplanes approaching Los Angeles from the sea but did not necessarily mean they were enemy. Anti-aircraft and machine gunners scrambled to their weapons at Ft. Mac Arthur, which was promptly placed on alert basis. Reports that the sound of gunfire could be heard could not be verified from listening posts at the beach or at the harbor. Definite indication that the Interceptor Command meant business by calling for the black-out was contained in a statement from a spokesman who said: “There are planes over the south of Los Angeles that are unidentified. The area will be blacked out until we can identify them.” When asked if Army planes had been sent aloft to contact these aircraft the spokesman said: “You can assume there have been.” Thousands of Angelinos, listening for straining ears for sounds of aircraft, were unable to distinguish sounds of motors, however. A few minutes after the black-out was ordered, the flashing of what appeared to be Army searchlights was visible in the higher portions of Los Angeles, 25 miles from the water front. Headquarters of the Fourth Interceptor Command, calling the blackout a success, said they had a report that unidentified planes were in the vicinity of Los Angeles.

• Burma: US bomber pilots flying missions from Burma to China reported being buzzed and circled by ‘glittering’ objects. Instruments failed to operate until the objects flew off.

• China, Qing Xian, Hebet Province: A domed UFO that emitted a white light was seen flying less than 20 feet above the ground.

• Germany, Schweinfurt: On October 14, 1943, US B-17s of the 348th Bomb Group had started a bombing run over Schweinfurt, Germany, when they ran into a formation of ‘scores’ of small, silvery disks, about one inch thick and four inches in diameter, flying toward the bombers. Major E.R.T. Holmes reported that one struck the tail of one aircraft, but without effect.

• Germany, Hagenau: On December 22, 1944, Lt. David McFalls of the US 415 th night fighter squadron was over Hagenau, Germany. At 6:00 am, he saw two ‘hug, bright orange lights’ climbing toward the plane. McFalls dived, banked and turned his plane, but the UFOs stuck with him for two minutes, then peeled off and blinked out.

• India, Kharagapur: On August 10, 1944, Captain Alvah M. Reida was piloting a B-29 bomber based at Kharagapur, India, on a mission over Palembang, Sumatra, when his right gunner and co-pilot noticed a sphere ‘probably five or six feet in diameter, of a very bright and intense red or orange in color’ that constantly throbbed, about 12,500 ft off the starboard wing. It kept up with the B-29, then flying at 210 mph. Reida tried to shake it off his plane, but it stayed in the same relative position until , after eight minutes, it ‘made an abrupt 90 degree turn and accelerated rapidly, disappearing in the overcast.’

• USA, Washington, DC. On February 22, Franklin D. Roosevelt writes a Top Secret memo on White House stationary for “The special committee on non-terrestrial science and technology.” Both the title and the content clearly allude to extraterrestrial life, the former using the word “non-terrestrial” and the latter talks about “coming to grips with the reality that our planet is not the only one harboring intelligent life the universe.

• World War II pilots on both sides of the conflict reported, “Foo fighters,” bright, unidentified flying objects that move in the sky in a strange manner.

• North Korea, Wonsan: Three Japanese Zeroes engage two daylight discs in a dogfight. One Zero is shot down, and the UFOs flee into space.

• USA, Alaska, Aleutian Islands: Fourteen men on the USAT Delarof saw a dark spherical object rise out of the water, circle their ship and fly off to the south.

• Sweden: The well-documented ‘Ghost Rocket’ invasion of Sweden took place as cigar-shaped objects rained down on land and lake in this area of northern Europe.

• USA, Florida: Pilot and crew of a C-47 aircraft 30 miles north-east of Tampa, saw a cigar-shaped object with luminous portholes hurtle towards them in horizontal flight at the same altitude of 4,000 ft. At 1,000 yards distant it swerved to avoid them. Estimated size of object was twice that of a B-29 bomber.