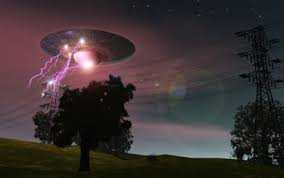 1751 Croatia, Agram: An iron meteorite crashes . The vapory cloud left by an aerial explosion was visible for an hour before it entirely dissipated. After the detonation took place, two masses of iron fell in the shape of chains welded together.

1752 Sweden, Augermanland: Luminous shperes were seen coming out of a bright cylinder.

1758 England: From Cambridge to Ross-shire. A dazzling light as bright as day seen over Britain Velocity was an estimated 30 mps; height over Cambridge 95 miles; over Inverness 30 miles. It seemed to descend obliquely towards the earth, and then ‘rose again with renewed splendor’.

1762 Switzerland, Lausanne: A huge spindle-shaped object was seen crossing the sun by two different observatories and was observed by one astronomer nearly every day for a month.

1768 Germany: The German poet, dramatist, author and scientist Johann Goethe was himself a witness to a strange luminous object. He was journeying from Frankfurt to Leipzig by stagecoach. At one point the rough uphill track was so treacherous from mud and rain that the passengers were forced to alight and follow on behind! It was then that Goethe suddenly became aware of lights in the ravine below them. Writes Goethe: All of a sudden, in a ravine on the right hand side of the track, I saw a sort of amphitheatre, wonderfully illuminated. In a funnel-shaped space there were innumerable little lights shining, ranged step- fashion over one another; and they shone so brilliantly that the eye was dazzled. But the sight was even more confusing because these objects did not keep still, but jumped about here and there, as well as downwards from above!”

1777 France: French astronomer Charles Messier saw a number of dark round objects in the sky.

1783 • England: The scientist Tiberius Cavallo was a witness to a sighting that also stunned Royal guests at a celebration to mark the birth of the 15th son of King George 111 and Queen Charlotte! A luminous object appeared from beneath a cloud and soon became brilliantly lit before coming to a halt. According To Cavallo”s account of the incident: “This strange sphere seemed at first to be pale blue in colour, but its luminosity increased and soon it set off again towards the east.” Even though the sun was shining the object is said to have lit up everything on the ground and eventually disappeared with a terrific explosion!
• England, Greenwich: An object was observed that ‘gave birth’ to eight satellites, which disappeared slowly towards the Southeast.
• England, Sudbrooke: Several people saw a luminous object hovering in the northeast at approximately 2200hrs. It emitted fixed flashes of light, lightning, which lasted about 30 sec. The object then seperated into 7/8 pieces and travelled swiftly horizontally before disappearing in an arc like a rocket.

1786 England: A bright ball of fire and light lasting 40 minutes was seen in the sky over southern during a hurricane of wind.

1787 Edinburgh: A bright fireball light like the sun was seen traveling horizontally through the sky at. It dropped a little, then rose again, bursting behind a cloud.

1790 France, Alencon: Police Inspector Liabeuf witnessed and investigated a large red globe as it flew over farmland. The globe landed and a man came out and spoke in a language none understood. The globe then exploded and the man disappeared. The event was witnessed by many and is well documented.

1793 Northumberland.: A bright oval light was observed in the sky over for around five minutes. At first it appeared the size of Sirius.

1796 Germany, Dresden and Berlin: A bright light irregular in form and the size of the moon was seen in the sky above. A large detonation was heard and a dark bituminous substance fell to earth.

1799 England: A “beautiful ball blazing with white light” was seen. It made no sound and red sparks flew from it.

1799 England, Hereford: A “large red pillar of fire” was seen in the sky going south. It was preceded by “flashes of extremely vivid electrical sort”. Other objects were seen leaving luminous trails.

1799 England, Huncoates and Lincolnshire: A ball of fire passed in the sky.

1800 Germany, Barsdorf:A shooting star got larger and larger until it fell to earth between Barsdorf and Freiburg in Silesia. A whizzing noise was heard as it passed close to the ground before it landed and then lay burning. Next day a jelly-like mass was found on the snow.

1803 Silesia, Barsdorf: What was recorded, as a shooting star got larger and larger until it fell to earth between Barsdorf and Freiburg. A whizzing noise was heard as it passed close to the ground before it landed and then lay burning. Next day a jelly-like mass was found on the snow.

1808 France, Piedmont: Formation of ‘luminous discs’ observed in the sky.

1812 Romania, Bucovina: The war between the Russians, French and Germans, over the town of Bucovina. ”Towards noon a large star with many rays appeared and in the night she ascended higher and flew in the direction of the Russians; afterwards she returned and went to the west, where the beams where extinguished. Thus did the star reveal herself for four months. It was during

1816 Edinburgh: Many people saw a large, luminous crescent-shaped object flying over the city.

1819 Massachusetts, Amhurst: A white silvery fireball light accompanied by a violent explosion was seen. Afterwards, a gelatinous substance was said to have been found.

1820 France, Embrun; A formation of flying objects crossed the French town. Francois Arago wrote of this date in the ‘Annales de chimie et de physique’: “Numerous observers have seen, during an eclipse of the moon, strange objects moving in straight lines. They were equally spaced and remained in line when they made turns. Their movements made a military precision.”

1825 Poland, Ohio: A brilliant object was visible in the sky for more than an hour.

1831 Germany, Thuringia: It was reported that a brilliant luminous disc was seen in the night sky.

1833 Canada: A large, square, luminous object was seen for more than an hour over Niagara Falls.

1836 France, Cherbourg: In this French coastal town what was a described as a ‘gleaming aerial vessel’ was seen in the sky overhead.

1846 USA: A ‘luminous flying disc’ was reported over this eastern seaboard area.

1847 England, London: A spherical craft was spotted rising vertically through the clouds.