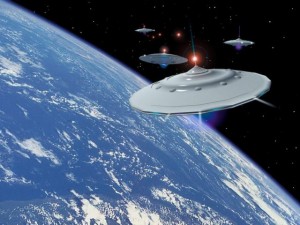 • Argentina, Veronica: Hundreds of residents witnessed six discs circling above the town, the disappearing into the night sky. This sighting was written within hours of a similar report from Captain Paul Carpenter near Denver. Carpenter reported the craft were traveling at 3,000 miles per hour, making it possible for the saucer to have appeared in both locations.

• Brazil, Itenhaem: A woman was awakened by a thunderclap and a strong bluish light. As she got out, she saw a large number of hovering disk-shaped machines resembling “inverted soup plates” 200 m away at an altitude of about 1 m. She observed them for 30 min, saw two figures standing on one of the craft and looking at the sky. They went back inside, and shortly thereafter the “fleet” took off, one object at a time.
• France, Belle-Ile: At a place alled “La Butte” a luminous sphere, which seemed to spin, its color changing from orange to white, was seen at low altitude. It oscillated left and right, then took off toward the southwest, according to the witness, Mr. Gauci.

• France, Le Vigan: Approximate date. Figures with helmets and masks were seen through lighted windows inside a bright yellow, cigar-shaped object on the ground. Length 30 m, diameter 6 m. Forward section was rounded, and a sort of fog was noted at both ends of object.

• France, Magneville: Men at work in the forest saw large, circular objects similar to parachutes coming down. Half a dozen witnesses.

• France, Marignane Airport: Customs officer Gabriel Gachignard observed a cigar-shaped object land briefly on the airfield 100 m away, producing a dull sound. The object was dark with four lighted windows. It took off with a “swish” and a shower of sparks when the witness ran toward it.

• Germany, Hasselbach: Oscar Linke, former Wehrmacht major, and his daughter Gabrielle, 11, had to leave their motorcycle when they had a flat tire. Inside the woods the girl noticed two men in silvery suits examining the ground in a clearing near a pink disk-shaped object, 8 m in diameter, showing a double row of openings around the rim and a black turret on top. One of the men had a flashing box. Both men went inside, and the disk vibrated, rose along the turretlike cylinder, then spun faster and rose out of sight.

• Ireland, Dublin: A child was burned when a strange disk, 25 cm in diameter, landed near Dublin.

• Italy, Castelfranco: Nello Ferrari, 41, a farmer, found himself flooded with a reddish light and saw a large plate 10 m above him, between gold and copper in color. At the center of the bottom surface, 20 m in diameter, was a cylinder of 5 m diameter made of rapidly rotating parts, producing a noise similar to that of an electric motor. On the upper surface was a turret inside which three occupants were visible, looking directly at the witness. They looked perfectly human, wore rubber coveralls and transparent face masks. They spoke a few words, which were not understood; a loud metallic noise was heard; and the top part of the object lowered itself toward the lower plate. The sound gained intensity, and the craft flew vertically at very high speed.

• Italy, Vico: A man who was fishing in the Serchio River saw a disk hovering for 10 min. From it hung a hose that plunged into the water. The object was 20 m in diameter, with five propellers in the rear and a dome with something like blades on top. An orange glow could be seen through slits along the deck. A man wearing a diving helmet looked at the witness through a window, and he received a kind of electric shock as a “green ray” hit him. He looked up with difficulty, in time to see the object fly away toward the east. Six days later a stranger with a foreign accent contacted the witness and intimidated him.

• Labrador, Goose Bay: A fiery, spherical object made a right-angle turn during an observation by a C-54 crew flying from Westover to Goose Bay. It was also seen from the ground by the control tower and by two men who plunged to the earth when the object made a low pass at them. It went away at 2247.

• Morocco, Dai-el-Aouagri: Approximate date. R. Petijean saw a luminous object, 20 m diameter, on the ground. It gave off bluish flashes as it took off, leaving a smell of burning sulphur.

• Peru, Puerto Maldonado: On July 19, the attention of Customs Inspector Sr. Domingo Troncoso, on the jungle frontier with Bolivia, was called to a very strange cigar-shaped flying object over the river area. The big dirigible-shaped craft was flying horizontally and fairly low in the sky, passing from right to left from the observer’s position. It was leaving a dense trail of thick smoke, vapor, or substance on its wake. This object was a real, structured, physical machine and may be seen from its reflection in the waters of the Madre de Dios river underneath it. The object was estimated to be over a hundred feet long.

• USA, Arizona, Tucson: On May 1, a base intelligence officer at Davis-Monthan AFB, Major Rudy Pestalozzi, along with an airman, looked up as a B-36 flew overhead and saw two shiny discs overtake the bomber, slow to its speed and position themselves alongside.

• USA, California George AFB,: Three men on the arms range, plus one Lt. Colonel 4 miles away witnessed five flat-white discs about the diameter of a C-47’s wingspan (95′) flew fast, made a 90^ turn in a formation of three in front and two behind, and darted around, for 15-30 seconds.

• USA, Florida, West Palm Beach: Scoutmaster J. D. Desverges told of having his arm singed by the blast of a UFO near West Palm Beach, Florida. Desverges, a hardware salesman, scoutmaster, and former marine, said that he not only sighted a flying saucer but came so close to one that the hair on his forearm was singed. He was 30 years old then. He said he was “blasted” by a “ball of fire” from the object when he investigated flashes of light near a country road.

• USA, Kansas, Frontenac: A man driving through a wood encountred a strange object and stopped to observe it. It looked like two turtle shells glued together, about 25 m long, with a humanoid creature in what appeared to be a control cabin in front. Windows lighted by an intense blue light and a throbbing sound were also reported. The object was oscillating and suddenly flew straight up with a strong humming noise. The middle section supported what looked like propellers. The object hovered 3 m above ground.

• USA, New Jersey, Passiac: Mr. George J. Stock, in the yard working on his lawn-mower, around 4:30pm, took a picture of an unidentified flying object with his box reflex camera. It was coming directly over his house from the IT&T tower, and was estimated to be 20 to 25ft above the ground.

• USA, North Carolina, Lamberton: A saucer-shaped craft, 3 by 2 m, landed on the witness’s property after hitting a chimney. A little man, about 70 cm tall, emerged and was asked whether he was hurt, but he did not answer. The craft took off with a whistling sound.

• USA, Oklahoma, Enid: Sidney Eubank went to the Enid police station and told Sergeant Vern Bennell that an enormous disk had buzzed his car as he drove between Bison and Waukonis on Highway 81. The rush of air made the car leave the road while the object flew west very fast.

• USA, Pennsylvania: Herbert Long saw an object land 15 m away from the road. He made a drawing of it.

• USA, Texas, Martin County: Mrs. Rogers saw an object descend slowly and pass across a pasture at 7 m altitude. She stopped her car and observed it was “wobbling” in mid-air, was shaped like a turtle, and showed three oarlike protrusions that moved slowly. Estimated dimensions: 5 by 4 m, 1 m thick. It was greenish-gray in color, emitted a blue flame, but showed no other light.