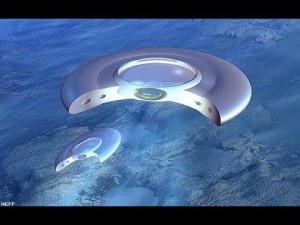 1910
• France: A rare photograph of entry number 5 in the Catalan Cup Race at a track in France. This picture also included a strange unidentified flying object seen over the tree tops beyond the line of spectators watching this race. There is no indication whether the photographer saw this object and intended to get it in the picture.

• New Zealand, Invercargill: Several witnesses among them the vicar, the Mayor, and a policeman saw a cigar-shaped object hovering at 30 m altitude. A man appeared at a lateral door and was heard shouting some words in an unknown language. The opening closed, and the object accelerated and was lost to sight.

• Normandy: The crew of a French fishing boat operating off the coast saw ‘a large, black, bird-like object’ fall from the sky into the sea, then bounded back before it fell once more and disappeared under the waves.

• USA, Arkansas, Fulton County: Myrtle B. Lee reported an experience she had with her brother when they were children in Fulton County Arkansas, “We saw a bright object hovering just above the trees about 50 yard from us. It was silver colored and shaped like a Zeppelin, but not quite as big. It had nothing hanging from the underside and there were no windows. When it took off we saw it start up, and it completely vanished before our eyes. We called it a balloon. When I saw a real balloon, I knew what Jack and I saw wasn’t a balloon. No one believed us when we told of seeing this thing.”

1912
• England, Chisbury, Wiltshire: Charles Tilden Smith reported the following case to the respected British science journal, Nature. For over half and hour Smith observed two fan shaped or triangular ‘heavy shadows’ cast onto clouds overhead. The clouds were moving rapidly, but the shadows remained stationary in the sky. From time to time the unidentified apparitions varied in size. Smith concluded that two large unseen objects in the west were intercepting the Sun’s rays.

• England: Mysterious airships hover over cities and towns in Kent.

• USA, Illinois, Lockport: Witnesses watched, as an object appeared to traverse the moon’s face for about three minutes. It was rectangular with absolutely flat ends, about two-thirds the diameter of the full moon in length.

• Canada, Toronto: Several office workers in watched what they concluded to be a fleet of airships passing west to east in groups. They then returned later in a scattered formation. No airships or airplanes were ever identified with this report.

• England: Two years before Germany officially launched its Zeppelin raids on Britain and phantom airships were once again crisscrossing the night skies. A few reports gave details of multi-colored, multiple lights being seen but as in earlier years the craft usually came equipped with one powerful light.

• USA, Michigan, Lansing: From the Lansing State Journal, June 30, “So swiftly did the strange craft travel that it was not more than three minutes until it had passed from sight in the northwest. The aerial mystery carried no lights of any description and was too elongated for an ordinary balloon. The craft was at a great height and when it passed to the northwest of the city had reached a still higher altitude.” A sizeable crowd at a racetrack in Lansing Michigan witnessed the event.
• USA, Wisconsin: Large cigar-shaped UFO flies slowly over Milwaukee and Sheboygan, Wisconsin, flashing its bright spotlight over streets and buildings, and then retreats back out into Lake Michigan.

• Canada, Ontario: Eight witnesses saw a UFO floating on the water of Georgian Bay. Entities were manipulating a hose dipped into the water. On seeing the witnesses they returned inside, all except one who was still outside when the craft took off.

• Norway, Alta: “From Alta it is reported that Thursday evening September 17, from 9-10 o’clock a strange and so far unexplained luminous phenomenon was observed by many people and from many quarters. The sky was completely overcast and it was full dark when a luminous point like a very large star appeared to the east over Elvebakken, proceeded over Bosekop, disappeared behind Skoddevarre, came out again at Kvaenvik and after several other movements disappeared in the direction of Talvik. The light was white as a rule but shifted in part over to red and blue. It was also observed by binoculars from the small steamboat ‘Sina’. Naturally it was guessed to be from an airplane. The light moved at various heights and as a rule without particularly great speed, except when it disappeared.”

• Norway, Morgenbladet: “An airship might have been seen here at 8 o’clock yesterday morning December 20. Many reliable people, among them the sheriff of Solum, sighted the airship. The sheriff watched it with binoculars. It was at a dizzying height and moved first inland, but then turned southward and went away to sea.”

• Norway, Tjolta: At Midlandet in Tjolta last Saturday evening November 21, an airship was seen again cruising about Skjaervaer Lighthouse, which it lighted up with a searchlight. The airship, which had a height of about 700 meters, descended to about 400 meters altitude, wherefrom it let the searchlight play on a passing ship. Thereafter it ascended again. Between 20 and 30 people watched it simultaneously.”

• Canada: It was billed in newspapers of the time as the Phantom Invasion of Canada. Mystery aircraft invaded the skies and capital of this nation.

• Turkey, Gallipoli: World War I, Hill 60. During, a regiment of the British Army, the 1st 4th Norfolk, disappeared in an attempt to take Hill 60 at Suvla Bay near Gallipoli. In front of 22 witnesses, the regiment, over 800 men, marched into a strange formation of lenticular clouds hovering over Hill 60 and was never seen again. Posted as missing, the regiment was thought to have been captured. After the war, Britain demanded the return of the regiment, but the Turks denied any knowledge of the regiment’s existence. No trace of the regiment has ever been found.

• Europe: “A zeppelin-like object rose straight towards the clouds in the rear of our lines not like a flying machine, but straight up. After running vertically, it suddenly darted forward at a pace which must have been 200 m.p.h. It then turned around and darted backwards and then suddenly rising, disappeared in the clouds.” Maurice Philip Tuteur, a soldier on the British front during WWI, in a letter to his parents. The object was also allegedly witnessed by two sergeant majors. Morgenbladet, Dec 22, 1914.

• Ireland, Ballinasloe: A bright object was seen hovering in the sky. It was visible for fifteen minutes before traveling to the northwest. It was then observed to hover for a further forty-five minutes. It eventually vanished for good after Venus rose on the horizon.

• Germany, Bonn: The flamboyant fighter pilot Baron Manfred von Richtofen, known as the Red Baron not only shot down 80 enemy planes for the Germans during World War I, he also was the first human in history to gun down an alien spaceship! That’s the fascinating claim of former German Air Force ace Peter Waitzrik, who says he watched in astonishment as the deadeye fighter pilot shot a UFO with undulating orange lights out of the sky over Belgium in 1917. Then, Waitzrik says, he stared in disbelief as two bruised and battered occupants of the downed craft climbed from their spaceship and scampered off into the woods — apparently never to be seen again. “The Baron and I gave a full report on the incident back at headquarters and they told us not to ever mention it again,” the feisty, 105-year-old retired airline pilot recently told a reporter. “And except for my wife and grandkids, I never told a soul. But it’s been over 80 years, so what difference could it possibly make now?” The aging Waitzrik said he and Baron Manfred von Richtofen — the renowned Red Baron — were flying an early morning mission over western Belgium in the spring of 1917 when the UFO suddenly appeared in a clear, blue sky directly ahead of their Fokker triplanes. “We were terrified because we’d never seen anything like it before,” recalled the easygoing great-great grandfather of five. “The U.S. had just entered the war, so we assumed it was something they’d sent up. “The Baron immediately opened fire and the thing went down like a rock, shearing off tree limbs as it crashed in the woods. Then the two little baldheaded guys climbed out and ran away.” Waitzrik said he assumed the glittering silver spaceship was some sort of enemy invention until the flying saucer scare that began in the late 1940s convinced him that his buddy had shot down a UFO. “The thing was maybe 40 meters (136 feet) in diameter and looked just like those saucer- shaped spaceships that everybody’s been seeing for the last 50 years,” the awed oldster said. “So there’s no doubt in my mind now that that was no U.S. reconnaissance plane the Baron shot down, that was some kind of spacecraft from another planet and those little guys who ran off into the woods weren’t Americans, they were space aliens of some kind.

• Portugal, Fatima: Such phenomena include disks, like an “aircraft of light,” described exactly in these terms by the witnesses of the fifth apparition. Also observed were double supersonic detonations, light protuberances, electro-static charges, and moving “stars,” mysterious white flowers or snow that dropped down from the “aircraft of light,” but disappeared when it made contact with the ground. These descriptions of “snow” or mysterious white “flowers” are quite similar to the descriptions of “angel hair” that are well known from some famous UFO cases. This was accompanied by additional unexplained aerial phenomena, in the form of glowing spheres and disc-shaped objects. A UFO sighting had taken place before a crowd of somewhere between 50,000 – 100,000 people! The story given was that a silver disc appeared just as “the rain stopped and the clouds rolled back, the sun dimmed out and everything took on a gray, opaque appearance”. The disc then dove in an erratic, zigzag pattern at the crowd, stopped just above their heads and then slowly maneuvered back into the sky. As it faded from view, the sun brightened and began to shine again normally. A local reporter took a photo of the disc.

• USA, Colorado, Salida: Minister and family use a telescope to watch a silver UFO shaped like a wagon wheel.

• USA, Texas, Waco: Edwin Bauhan, one of several soldiers at Rich Field in Waco Texas who observed a 100-150 foot long cigar-shaped object after leaving the mess hall. “It came directly overhead, and was no more than five hundred feet high so we got an excellent view of it. It had no motors, no rigging, it was noiseless, a rose or sort of flame color, I could observe no windows. We all experienced the weirdest feeling of our lives, and sat in our tent puzzling over it for some time.”