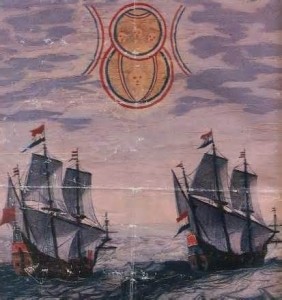 1027 During August in Egypt, a number of “stars” were seen to fly over Cairo and the Nile Delta.

1034 Europe: A rare typeset book from 1493 contains what may be the earliest pictorial representation of a UFO. The book Liber Chronicarum, describes a strange fiery sphere, seen in 1034, soaring through the sky in a straight course from south to east and then veering toward the setting sun. The illustration accompanying the account shows a cigar-shaped form haloed by flames, sailing through a blue sky over a green, rolling countryside. This may be the first work that actually contains actual illustrations of UFO’s.

1113 England, Wessex: A group of churchmen from Laon in France were going from town to town in Wessex, bearing with them relics of the Virgin Mary, which they used to perform miracles of healing. At the coastal town of Christchuch, they were astonished to see a dragon come out of the sea, ‘breathing fire out of its nostrils.’

1133 Japan: A large silvery disk is reported to have come close to the ground.

1078 England: ” In this year appeared the wilde fyr such as no man before remembered: and moreover it did harm in many places.”

1180 Japan, Kii province: A term equivalent to our “flying saucer” was actually used by the Japanese approximately 700 years before it came into use in the West. Ancient documents describe an unusual shining object seen in the night as a flying “earthenware vessel.” The object, which had been heading northeast from a mountain in Kii province, changed its direction and vanished below the horizon, leaving a luminous trail.

1200 England: William of Newburgh describes a silvery, flat, shiny disc-like object, which appeared near the abbey and frightened everyone near it.

1207 England, Tilbury:Gervase of Tilbury writes in Otio Imperialia about an aerial ship which caught its anchor on a pile of stones. An occupant came down from the ship and managed to free it, however he was asphyxiated by the atmosphere.

1211 England, Gravesend, Kent: During a Sunday mass it is said that the congregation saw an anchor descend and catch on a tombstone in the churchyard. The churchgoers rushed outside to see a strange ‘ship’ in the sky, with people on board. One occupant of the vessel leaped over the side, but did not fall: ‘as if swimming in water’ he made his way through the air toward the anchor. The people on the ground tried to capture him. The man then ‘hurried up to the ship.’ His companions cut the anchor rope, and the ship then ‘sailed out of sight.’ The local blacksmith made ornaments from the abandoned anchor to decorate the church lectern.

1235 Japan: What might be called the first official investigation of a UFO sighting occurred in Japan in 1235. During the night while General Yoritsume and his army were encamped, mysterious lights were observed in the heavens. The lights were seen in the southwest for many hours, winging, circling and moving in loops. The general ordered a “full-scale scientific investigation” of these strange events. The report finally submitted to him has the “soothing” ring of many contemporary explanations offered for UFO phenomena. In essence it read: “the whole thing is completely natural, General. It is… only the wind making the stars sway.”

1239 England: Matthew of Paris: “On July 24 at dusk, but not when the stars came out, while the air was clear, serene and shining, a great star appeared. It was like a torch, rising from the south, and flying on both sides of it, there was emitted in the height of the sky a very great light. It turned quickly towards the north, not quickly, nor, indeed, with speed, but exactly as it wished to ascend to a place high in the air.”

1254 England, St Albans: Some monks at saw in the night sky ‘a kind of large ship elegantly shaped and well-equipped and of marvelous color’.

1270 England, Bristol: A spaceship was seen, which landed and an occupant came down from a ladder and was suffocated in the Earth’s atmosphere.

1271 Japan: The famous priest Nichiren was about to be headed at Tatsunokuchi, Kamakura, when there appeared in the sky an object like a full moon, shiny and bright. The officials panicked and the execution was not carried out.

1290 England, Yorkshire: The Abbot and monks of Byland Abbey, (the largest Cistercian abbey in England), were about to commence a meal when one of the brethren ran in to announce a great portent outside. They all ran outside and saw a large silver disc fly slowly overhead and caused the utmost terror.

1320 England, Durham: After the abbot of Durham Abbey died and was buried, a strange light was seen to descend from the sky and move about over his grave.

1332 England, Uxbridge: There was seen in the sky a pile (pillar) of fire the size of a small boat, pallid and livid in colour. It rose from the south, crossed the sky with a slow and grave motion, and went north. Out of the front of the pile, a fervent red flame burst forth with great beams of light. Its speed increased, and it flew through the air.

1347 Europe: Black Plague, 1347-50: Reports from this period feature strange cigarlike objects flying low through the sky and dispersing noxious mists. Soon after these objects passed by, plague would break out in that area. Other features from this period similar to modern UFO reports include sightings of mysterious MIB-like scythe-wielding “reapers” clad in black hoods & robes, and mysteriously slaughtered cattle and other animals. One year before an outbreak of plague, a “column of fire” was seen over the Pope’s palace at Avignon. A monstrous “whale” was cast ashore at Egemont shortly before another plague outbreak, and numerous times during this period “rumblings like thunder” were heard even when there were no storms. Blazing “comets” were seen numerous times in the heavens – some of which may have been real celestial objects frightening an omen-crazy populace – of which numerous were said to be accompanied by “flames” (aurorae?) hanging low in the sky.

1361 Japan: A flying object described as being “shaped like a drum, about twenty feet in diameter” emerged from the inland sea off the western Japanese coast.

1387 England, Northamptonshire: A fire in the sky, like a burning and revolving wheel, or round barrel of flame, emitting fire from above, and others in the shape of a long fiery beam, were seen through a great deal of the winter.

1453 Constantinople: “A fire descended from the sky, stood over the City, and enveloped her with light all night long.” Written during the siege of Constantinople.

1458 Japan: An object as bright as the full moon, followed by curious signs, was seem in the sky.

1461 France, Arras: A fiery thing like an iron rod of good length and as large as one half of the moon was seen in the sky for less than a quarter of an hour. This object was also described as being “shaped like a ship from which fire was seen flowing.”

1468 Japan: A dark object, which made a “sound like a wheel,” flew from Mt. Kasuag toward the west at midnight.

1479 Arabia: There is a woodcut of UFO that was sighted over Arabia in an illustrated volume published in 1557. The Prodigiorum Ac Ostentorum Chronicon, text by Conrad Lycosthenes, is one of the best-illustrated books of the Renaissance depicting medieval superstition. On page 494 is a woodcut showing a spaceship seen over Arabia in 1479.

1492 From “The Life and Voyages of Christopher Columbus.” Christopher Columbus and Pedro Gutierrez while on the deck of the Santa Maira, observed, “a light glimmering at a great distance.” It vanished and reappeared several times during the night, moving up and down, “in sudden and passing gleams.” It was sighted 4 hours before land was sighted, and taken by Columbus as a sign they would soon come to land.