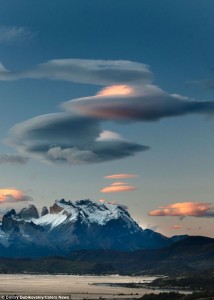 • Argentina, Boa del Tigre: Remo dell’Armellina was driving a truck toward Santa Fe when he saw a figure, 3 m tall, blocking the road. He went toward it with an iron bar but could not approach because of the stench and the blinding phosphorescent light emanating from it. It had very long arms, a scaly body, and wore a flight coverall. The witness fainted; nothing was left to be seen when he regained consciousness.

• Argentina, Tabladitas: Approximate date. In the mountains, about 14 km from Abra Pampa, a luminous object 30 m in diameter came to ground level.

• Australia, Farm Hill: Brian Crittendon, 21, was chased by a dome-shaped object that emitted a narrow light beam toward the ground. He was so frightened that he drove home on a half-flat tire, followed for 5 km by the object, which was about 50 m away and 10 m above ground. It overtook his car at a speed exceeding 100 km/h. Radio interference was noted, but no noise.

• Brazil, Abaatu: All night long, three hovering disks were seen by several witnesses in this area. A railroad employee, Mr. Cavalheiro, and the station chief, J. Machado, wired the Tupancireta police, and all saw the objects coming to ground level about 1 km away. At times they appeared to exchange signals. One of the disks flew over the station itself, leaving a luminous trail and considerable heat.

• Brazil, Conceicao Almeida: Three witnesses, among them Dr. C. da Costa, decided to sleep in their car when the engine stalled and could not be started again. Then a very large, blue silvery object appeared and came to ground level with a swinging motion. It was shaped like a sphere surrounded by a flat ring. When they tried to approach it, the object maneuvered in a strange “aerial dance. ”

• Brazil, Maceio: Near Paripueira, jeweler Wilson Lustosa and numerous fishermen saw an object hovering 15 m above the sea, 40 m away. It was lens-shaped, about 12 m thick, and showed portholes with a glowing red light. Below the object the water seemed to be “boiling” or attracted upward, while a soft, whirring sound was heard. For one hour the object kept going up and down.

• Brazil, Trindade: Off the Brazilian coast near Trindade a ship’s crew as well as a Mr. Barania, photographer for the Brazilian Navy witnessed a saucer shaped object that shadowed the movements of the ship. No warfare exercises were practiced. Instead, the Brazilian vessel was participating in the International Geophysical Year of 1958. Computer enhancement of photographs taken reveal that the craft was composed of a globe circled by a large, metallic ring much like the planet Saturn.

• Canada, Caledon East: A civilian reported an elliptical, aluminium-colored object at 2 km altitude, coming down to 4 m, flying up and down by sudden jumps, stopping at ground level less than 200 m away for five min. A red light appeared at one end of the object, which gradually took a fiery color, then exploded. The witness ran away.

• Colombia, Bogota: Eight people working in a wood saw a green creature with scaly skin and very long arms. The pointed nails of its long fingers nearly touched the ground.

• France, Beaucourt sur Ancre: A Hungarian refugee, Michel Fekete, was riding his bicycle when he saw an object hovering 30 cm above ground and four little men nearby. The police found lava-like fragments at the site. Six other witnesses vouch for the sighting including Messrs. Iklef and Lepot and their wives. The craft was luminous, pulsating between red and white (remaining red longer). When white, it was more blinding than a powerful searchlight. It was 50 m away from the group of witnesses. Occupants were about 30 m tall with a beige gray body, an abnormally large black head, and a waddling gait. The object flew away when a car came into view.

• France, Clermont-Ferrand: Approximate date. A disk of 20 m diameter was observed and caused damage on the ground.

• France: Jacques Chapuis, astronomer at Toulouse Observatory saw a maneuvering yellow star-like object for 5 minutes on November 10. The UFO finally ascended straight up and out of sight.

• France, Laval: About 11 km before Laval, a businessman coming from Paris suddenly saw a motionless object, 10 m above ground, to the left of the road, 150 m away. It was shaped like two cones with a common base and showed two rows of about ten openings in the middle section. It seemed about 20 m wide, metallic, with a light similar to that of a red traffic light shining through the windows. The witness had time to stop and maneuvered to get the object in his headlight beams. Throughout the observation a whistling sound such as that of a jet aircraft was heard. The object rose very slowly, flew off faster climbing out of sight.

• France, Longchaumois: A businessman and his wife saw a large, lighted object with openings, which hovered, came to ground level, and took off with a great increase in brightness at very high speed, but without noise.

• France, Palalda: Mr. and Mrs. Firmin Bason heard an unusual noise and saw a whirlwind of flames 10 or 15 m above ground, coming down toward the vineyard. It was red and blue, spinning wildly, flying slowly. It hovered for 5 min over plants which moved violently, then it flew south with a deafening roar, hovered again and departed to the southwest. Diameter at the top: about 5 m.

• France, Roulon: Two witnesses in a car saw some thing they described as “a dark, transparent ball” about 50 cm in diameter rising from the side of the road. It had appendages trailing behind.

• France, Ugines: Two engineers were driving about 200 m from the railroad crossing in Faverges when they saw a nearly spherical object at ground level, performing zigzags on the road. They stopped and were amazed as the object simply vanished, leaving no trace.

• France, Vinssur Caramy: At an intersection, two women, Mrs. Garcin and Mrs. Rami, suddenly heard a noise and saw behind them a top-shaped object, 1 m high and 1 m wide, nearly touching the ground. It made a sudden jump and landed again: There were a number of antenna-like projections on top of it. The noise did not come from the object, but from a metallic road sign vibrating in its vicinity. ”

• Ireland, Portglenone: A black flying object, 2 m wide, cut a tree in two, 3 m above ground, and did not stop. The tree in question is 70 cm wide and 13 m tall. This event was observed by a farmer named Bennett.

• Japan, Shimada City: A very bright object landed before numerous chemical workers; they reported beings alling from the sky without parachutes. They wore strange suits and spoke an unknown language.

• Norway, Stavanger: A woodcutter reported that he saw an object land, and a very tall man with a tanned face, wearing a helmet, stepped from the machine. He went back in after a few minutes; the craft took off “with a noise like a flock of birds. ” Air Force officers and policemen searched the snow covered hill for traces.

• Russia, Moscow: A large, disk-shaped object was seen on the ground. It rose in a spiral motion, then took off and was lost to sight.

• San Salvador, Cojutepeque: An engineer, Julio M. Ladaleto, stopped when his car hit a can rolling on the road, then observed an object about 35 m away. It was shaped like a lamp shade with an upper transparent sphere emitting a bluish, pulsating light, 12 m diameter, 7 m high, resting on three half-spheres. An occupant 2. 5 m tall was photographed by the witness as he crossed the road and appeared to inspect the craft. He wore a blue coverall and luminescent heelless boots, and had a bald head. The observation lasted 10 min, after which the object took off with a whining sound, sparks and smoke. The following day, before he had revealed anything about the case, Ladeleto was contacted by strange “newsmen” who appeared to know all the details of it.

• Scotland, Braemar: Two soldiers of the Territorial Army on an exercise near Ballater heard a “gurgling noise” and saw two figures, over 2 m tall, dressed in peculiar suits. As they fled, they heard a “swishing” noise and saw a large disk flying at ground level, which then swooped over their heads and away, pulsating and leaving a sparkling trail. Witnesses were in a state of shock.

• Sweden, Hoganas: Near Domsten, Hans Gustavsson, 35, and Stig Rydberg, 30, saw something in the woods and stopped their car to observe it. They found a disk about 5 m wide set on a tripod. All of a sudden they were attacked by four gray-colored creatures described as “fluid, ” but one witness reached the car and blew the horn for help. The beings fled and the craft took off, emitting “paralyzing vibrations. ”

• Switzerland, Leman Lake: A dozen people out on the lake in perfect weather saw a bright light coming down. They stopped their boat as it came to hover about 15 m above them. It was saucer-shaped, 10 min diameter, with a cabin showing several windows on top. The outer disk below the cabin was spinning. As it came down toward the water, a noticeable current was created. No noise or occupants were noticed. After several leaps in mid-air, the craft flew off at “unbelievable” speed.
• Uruguay, Salto: Uruguayan Air Force pilot engaged a daylight disc UFO in a dogfight over Pan de Acucar, near Salto, Uruguay. The UFO used a microwave beam to disable the plane.

• USA, California, Healdsburg: Two persons, in their backyard, saw a round object 1 m in diameter come from the west and land 15 m away. It took off toward the east, turned south, and was lost to sight.

• USA, Florida, Tampa: A civilian source was said to have observed a balloon-shaped object land on the airfield then take off slowly and hover at 250 m altitude before disappearing. It showed a bright light source.

• USA, New York, Depew: A lady who was driving on the New York State Thruway during a snow storm saw a large shape with a tall, luminous pole on the side of the road. Her car stalled, and the lights went off. Two figures, looking like animals or huge insects were observed near the pole. They soon disappeared, and the object took off spinning. The witness was then able to start her car. She noted that the snow at the site had been melted and the grass was warm.

• USA, Ohio, Sheffield Lake: A circular, flat object, 7 m in diameter, 2 m thick, hovering 1. 5 m above ground, and making a jet-like sound was seen from a house by a civilian woman. Its color was that of aluminium; it had a wobbling motion and emitted gray smoke before rising again and taking off.

• USSR, Moscow: Near Moscow, a large, disk-shaped object was seen on the ground. It rose in a spiral motion, then took off and was lost to sight.

• USSR: A luminous object, with an apparent diameter greater than that of the full moon, was seen coming down from a high altitude, hovering at tree height, then landing. It was observed for two min.

• USA, Michigan Aug. 17, 1958; Warren, Michigan. 7:05 p.m. Witness: A.D. Chisholm. One extremely bright object shaped first like a bell, then like a saucer, hovered for 5 minutes, flipped over and sped away to the west-south-west. Sighting lasted 6-10 minutes.