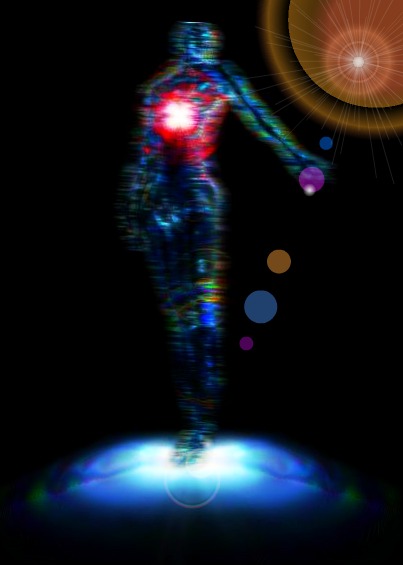 Long ago, before time, before form. All souls were created in less than the blink of an eye. Millions and millions of individual lights were scattered over the darkness of eternity some clustered and others drifting on their own but still connected by a single filament of gold light thread. Each independent and with awareness yet just a single flicker of light that connected them each to the other and then all to the creator. They floated for I don’t know, maybe millions of years just being and while they floated, around them a universe was created, galaxies and endless planets and suns.

The light show went on and is still going on to this day. The light souls were gathered together and silently there was a call for volunteers, I’m sure it was done more profoundly but this is the only way I know how to explain it all. I was originally given just the vision of the process and then had to put my own words to the entire scenario. So if I sound irreverent anywhere please excuses me. There was a group of souls clustered in one area; there were a hundred and forty four thousand of them. I like to think they were around the water cooler comparing their auras, probably not the case, in any rate they seemed to not respond to the call and so became the volunteers. They agreed to bring their Light Body Energy into a lifetime once every two thousand years or so, as a group. The Light Body Energy here would become the energy that is usually left on the other side as the gate keeper when the spirit incarnates. This is the first element we see when we cross over. It carries the same form we have in the physical so in essence at the moment of death we meet ourselves and become one once more. This didn’t seem, at the time a lot to ask of anyone.

So then the soul energies, the specks of light were scattered all over the universe, throughout creation to take on the forms that were appropriate to the areas that they settled in, to begin their journeys back to the source of creation. They took on density and form and lived a physical life in a realm very unlike what they were used to. Those who fell upon the earth plane, both volunteers and others created groups and then villages and then towns and over time and generations of the soul’s evolutions cities and nations. And every two thousand years the volunteers brought with them into incarnation the Light Body energy. The Bible speaks of them as fallen angles, this is not the case. They are on the earth’s surface to act as Sheppard’s of sorts. They are also here so that they can help to facilitate the shifting of the consciousness of humanity and are here to provide a sort of anchor for that shift to take place. They have been scattered all over the globe and if you connected them with filaments of light, the globe would look as if it was covered with a net or net work of light. The shift in consciousness takes place when that web is expanded and stretched outward by a force of light energy that is the source of creation. It expands the consciousness of every living organism upon the planet, including those who carry light body energy. It expands understanding and insight and sends everyone within to discover the greater wisdom’s that are then available to them.

In a way much is revealed to those who seek. That shift took place in the early 90’s and those with light body energy went through an upheaval in their personal lives … for some it was an unexpected shift of employment , for others relationships took radical shifts, for others there were physical emergencies and for others still accidents that changed their physical realities forever. No matter what the cause, these individuals had a rather rude awakening and their lives were changed in amazing ways. For me it was a car accident that took me from the security of a teaching career, through seven years of law suits, vertigo and then early retirement so that I could pursue my pathway of spiritual teaching and learning.  Everyone on the planet experienced a shift in consciousness; those with light body energy just did it on a much more impressive scale.

Once the shift took place the light body energy, now a new level of consciousness began to reach for information, learning experiences and insights to the physical plane. It had not after all been present in the physical for over two thousand years and there was a lot to gather. Light Body energy people felt and still feel driven, they don’t know where they’re going but they know they have to get there. They bore easily for when they totally understand something it’s time to move onto something else, they will often have a great many different projects going at the same time just to keep them occupied. They want to organize and focus all their friends, and they have no problem giving their opinions, the only problem is that their advice is rarely taken and that frustrates them greatly.

Those who have this energy will find that many come to them for advice and usually the problems are indeed a challenge, something light body individuals enjoy … the only problem is that light body individuals are here to teach as examples, to be an illustration of what living in the light and using the creative to fuel their lives spiritually and that brings all sorts of abundance into their lives. Giving advice is not in the job description, as a matter of fact giving advice often creates more problems than it solves. The advice given is appropriate for the one giving it and almost always will not work for the one seeking guidance.

People do seek out the light body energy individuals because of the energy they radiate. People with problems love to talk about them but often are not seeking answers but rather sounding boards to reflect back at them so that they can solve their own issues according to the journey they are on. This does not often occur to light body people, their energy and intensity drives them to get involved whenever they can because they have all the answers inside of themselves. And they do, but it is most appropriate for their lives and no one else.

Relationship and friendship are also areas that are challenging. These individuals have greater depth and intensity than most and as a result expect more of friendship and relationship. Their capacity to give and receive is very intense and when they do not get back the same intensity they often get board and move on. It’s important for them to realize this or they will feel isolated and wonder why they don’t fit in with everyone else. Everyone with this energy active within them comes to this point sometime in their lives. The reality is that they are isolated, both because of the intensity within them and because for this lifetime they did not incarnate into the earth plane as they had for so many other generations.

We incarnate in soul groups through time, these soul groups could be described almost as an entire village of spirits and we change each lifetime as to sex and social status, religion, culture and relationship to the others in our soul group. Light body energies were such a village at the time of creation, and during normal evolutions they do incarnate in close proximity one to another. But during those times of shift in consciousness, every two thousand years this pattern changes and they are scattered all over the earth plane. They come to rest in areas where their light will help others who are seeking and by example will they share their wisdom’s and their lights. This makes life a bit more of a challenge for they often feel alone and isolated even though there are family members close at hand.

When you incarnate away from the soul family it can be unsettling, and often there is a wander lust, wanting to travel and explore, in reality looking for home and family. There are times when light body energies find one another and then the sparks do fly, they can’t stop talking to each other and it’s like they have to catch each other up on lifetimes of experiences. When Light body energies connect friendship is intense and there is respect and a bond that is unexplainable within the physical reality. While there is a cosmic purpose to the scattering of a soul family, this lifetime it appears that there is a need for the family to form links even though it is in unusual ways. There is a web of energy that the light body individuals crate and this lifetime it seems that it is important for them to recognize each other and in some way to share energies. I believe that’s why the patterns came through to so many different people all over the globe, to awaken recognition of the energy and to reach out and connect with each other, to be an unusual support system and to link together as family even though thousands of miles separate them.

I know the question is out there, how I know if I’m one of these extraordinary individuals or not. If you fit into the criteria I’ve already given, and if you feel that there is a purpose to your life and you just have to find it, good chance you are. I’ve identified a couple of hundred of you in my travels, I don’t know of anyone else who can see the energy the way I do so rather than asking a psychic (please don’t do that, most psychics aren’t light bodies) Look within yourselves, the answer is there.

The purpose of Light Body energies, after the shift of consciousness takes place; it is to cause others to wonder where their inner lights are and send them within to find that radiance, not by words but by deeds. This is so very hard for light body individuals because they really like to talk about the wisdom they have gathered and they also really take a strange kind of pleasure out of counseling others on how to fix their lives … speaking from experience here.

Our greatest challenge is to teach by example and to walk our talk, and for those with light body energy this is very, very difficult.  There are a few perks, Light body energies do usually have very long and healthy lifetimes, long enough to traumatize children and grand children. They are very manifestational and often can make magic happen by using their imaginations and bringing creative energy into places where it usually has not been used. All you have to do is suggest something to a light body individual and they are usually off and running, with others often suggestions just hang in the air and dissipate. These are the doers and if you tell them something can’t be done they just love the challenge even more.
While light bodies individuals have great challenges this lifetime so do those who do not carry this energy. This is a time of awakening to the spiritual realms on new levels of consciousness. It is a time when the spiritual flows through creation and the creative energies and opens our hearts and eyes to the greater potentials of the human spirit. Whether or not you carry this energy it is an amazing time to be present on planet earth to watch the light show that is taking place in the ether around us.