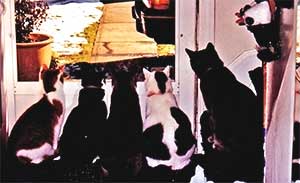 It’s no secret to anyone who knows me that I have a cat major with a dog minor. I have always had a cat or two around because they give me joy and pleasure. For me they are mystical creatures who listen without comment and agree with everything you say (as long as you feed them on a regular basis and remember to scoop the litter box in a very regular manner). When my mother was ill and a bit depressed I found that adding two five week old kittens to the then one-cat house seemed to pick up her spirits. Who can watch kittens without laughing and even forgetting problems, for a time?

It worked so well that, two years later when things took a turn for the worse, I figured if two were good, three would be better. This time they were about four weeks old and had to be bottle fed every two to three hours. You could hold them in the palm of your hand and it was love at first sight. By then there was also a dog that had sort of slipped in unnoticed. I think my mom threatened to evict me if I added to the menagerie, but I was counting on her marbles rolling and losing count before she realized how many four-legged critters were actually living with us. After mom’s passing, I moved and declared that seven was plenty and that I was done. It only took four months before we were eight — I had rescued a beautiful female who had been pregnant and abandoned. She had been in a cage for three or four months and it broke my heart, so home she came with me. It isn’t as easy to introduce a new adult to an already formed pack.

At this time, we are six months into the process; she is my closet kitty, but slowly getting used to everyone. She doesn’t hiss at all the cats now and given a few more years I’m sure we’ll be fine. They are my friends and companions and a warm fuzzy when I can convince one of them to sit still for a moment. They give me love and joy, what more can I say? One would think that the zoo was complete with six or seven cats, but not so. I did declare that I wouldn’t collect any more but those kinds of declarations to the Universe aren’t really the wisest and I should have actually known better. As of 2010 the number of cats in residence has expanded to nine. Three amazing babies from California arrived in June and have blended with the rest … I’m seriously considering applying for re zoning as a cat shelter, only problem is once they cross the threshold, they’re here for life. 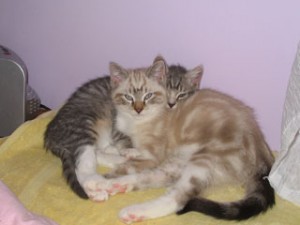 They were born on my birthday – how could I not bring them home. They are ten weeks old and inseparable. I had forgotten how little and soft kittens could be. 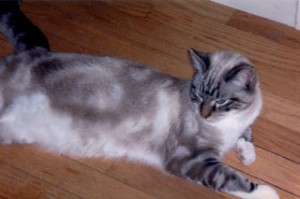 Leo – As soft and sweet as he looks, He snuggles and likes to get as close as he can no matter what you are doing. He is sweet and gentle and has fit into the pride so well it’s hard to remember that he and his sister are the newest to the bunch. He is the calm one, though I think I may have a gentle giant on my hands.Though part Siamese he doesn’t talk much and when he does it’s just a squeak. 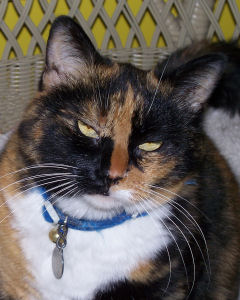 Polly  – The Queen of the herd – she’s a pterodactyl (extra toes on all of her feet). She loves to show you her tummy (just don’t be foolish enough to touch it). Polly has lived in denial ever since another cat came into the house. I think her theory is that if she ignores them, they’ll go away. It hasn’t worked yet, but she hasn’t given up either – you have to admire her determination. 20 years and counting! 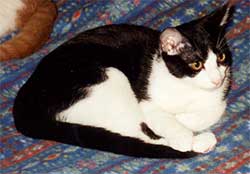 Yoda –   When I got her she would sit in the palm of my hand – she wasn’t more than three or four weeks old and was the runt of the litter. I worried she wouldn’t make it. Well, here we are five years later and at fifteen pounds she’s here to stay. She got her name because when I got her she was all eyes and ears – Yoda – the name stuck. She is wise and wonderful and the only one who likes to cuddle, so far. 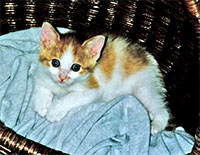 Baby – He is just that. Taken away from his mother before he was done nursing, we found that he would knead and nurse on any available skin when he was tired. As a kitten it was cute, today it is painful, but still cute. He is the most outgoing of all my cats. He is loving and friendly and adores strangers. When Mom was in the nursing home before she passed I took Baby in to visit her. When she no longer recognized us we made the rounds to others who loved cats and missed theirs. He purred and talked to everyone and spread a very special kind of love in a place where there aren’t many “warm fuzzes” walking the halls. 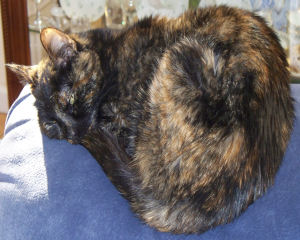 Boo-Boo – If you have a lap, Boo-Boo is in it. She will curl up and let you know you are loved even if you are a perfect stranger. She is just a little skinny though she eats like a horse and the sheer mention of food has her in the kitchen before your thought is complete. We’re still trying to convince her that she will not starve and that there will always be food for her, a losing battle I fear. 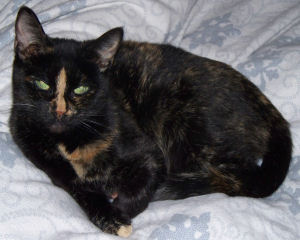 Baby Too or Floppy Cat to her friends – This little bit of fur has an attitude that belongs to a lion. She puts the larger boys in their place and lets them know who is in charge. Poor baby, when she arrived she had not been altered and with her first heat she discovered that though she was surrounded by many very handsome males, none of them had the slightest idea of what all the howling was about. She is dainty but with an attitude and full of love, she just loves to cuddle.

Gone to Good and Loving Homes and always welcome to return 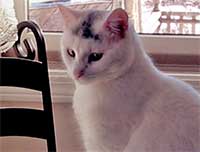 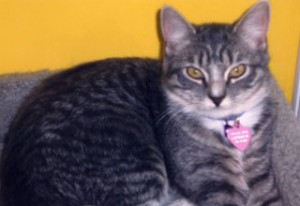 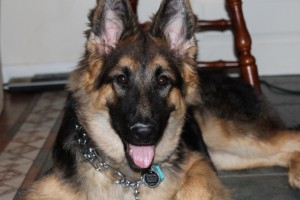