I have a love of flowers and everything connected with them (except for worms). I spent decades working on the gardens at the family home; building the soil, defining the beds and lovingly planting thousands of flowers. The magical part of it all was that everything grew … even the stuff that wasn’t supposed to grow in the kind of soil I had. I think it was because I was out there every day cheering them on and begging them to grow. My mother and I did the rounds every day and everything, even the weeds, got talked to. My philosophy is, if it flowers and you like it, leave it alone. As a result, my garden was a combination of formal roses and old English garden along with pretty weeds. 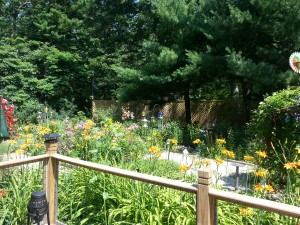 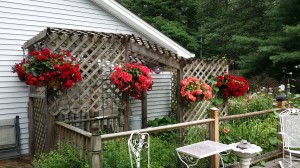 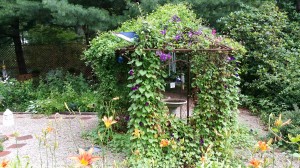 The family home had been an anchor both physically and emotionally for much of my life. We built that house so it was very special. It provided shelter through storms of weather and emotion, and protected us from all manner of growing pains. For over twenty years I conducted meditations there so the positive energy continually grew. It was built near an Indian burial ground and often you could feel that presence, especially during the meditations. I also gave thousands of readings in the house as well as painted the mandalas for The Cosmic Deck of Initiation. There are close to 500 personal Mandalas that I painted, now scattered around the world, which also attracted great spiritual energy. Both the house and garden were full of joy and light and sheltered my family for fifty years.

With the passing of my Mother in 2003 the Universe made it clear to me that it was time to take my small zoo and move on to new territory to create a new center – a new home and new gardens. It was a massive undertaking, but one that in retrospect flowed rather well. The Zoo and I ended up in Connecticut, in a wonderful house with lots of room and property that goes on forever…almost. When I was done with the unpacking, I rolled up my sleeves and began to plan my garden — there was nothing that even remotely resembled a garden and I soon found out why. There was no dirt, no soil, just dust and rocks. Talk about a clean canvas. I was sent back to the drawing board a bit frustrated. In the first year I removed overgrowth, carved away a hill and put up a rather impressive retaining wall, started several small gardens on the side of the house, put up about forty hanging baskets to have flowers for the summer, and laid the ground work for raised flower beds in the front yard.

The best part I left for last. The house sits on the north end of a huge pond and the view is breathtaking. I saw the view and bought the house; I don’t think I even walked through it first. The sun rises over the pond and it is magical. Every morning there is something new to discover. Over the winter there was ice skating on the pond along with crazy people who ice fished. I hear that they catch some big ones but that has never been one of my passions. The land and the pond are inspiring and mystical. I feel very blessed to be here and I know that in some way I was led to this house for a greater purpose.