When A Loving Pet Passes 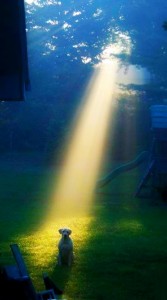 I had the sad occasion to receivethe poem linked above, the author’s are Steve and Diane Bodofsky, twice in one year. Smudge and Chelsea both passed away and it has left a void in my heart and life. I did a lot of thinking about the enormous role pets play in our lives. When they join us there is an unspoken covenant formed, they love us unconditionally and we promise to care for them, to love them and to make sure they have the best quality of life we can provide for them. It is the last of these that is so very hard, for the time comes, often when we least expect it, that we have to make a choice for them that is painful and tearful. We have to make the choice when it is time for them to move on and be free from pain. My two pets filled their part of the bargain thousands of times over, the joy and laughter, love and caring they gave to me carried me through some of the saddest times in my life, and they did it without words, with unspoken love that was poured onto me without being asked.

When our pets pass away they take a part of us with them and we keep a small part of them, in memories and photographs and often a shredded chair or two. They are a very real part of our families and provide so much more than we ever realize until they are gone. I believe that they each have an individual soul and that they will indeed meet me when I cross over. Until then I will miss them, tell stories about how they brought laughter into my life and taught me about unconditional love in the most profound of ways. They lived it and they did to so well the lesson was recognized and registered in my heart forever. 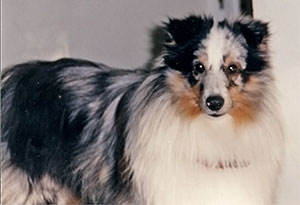 Chelsea – my only dog – is a Sheltie and he is often species-challenged so he fits right in. He thinks he’s much bigger than he is, so often he insults larger dogs who try to befriend him. He runs well and herds me around the yard every day. I don’t own a pair of pants or socks that he hasn’t left his teeth marks in. He is a big help around the garden, digging up whatever I plant – a game we play over and over again. Our plants live in spite of us not because of us. 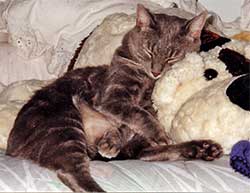 Smudge 5/8/99 – 4/28/06
Smudge – One of the sweetest, softest cats ever. A bit hesitant but once he knows that all you want to do is worship him he’s just fine. He has an addiction to woman’s hair when it’s in a braid or pony tail – his eyes glaze over, his pupils get real big and he looks like he just saw Santa for the first time. Lucky for us that the times he has spotted a braid or pony tail and tried to drag it off to a corner, my friends have been very understanding. No we didn’t get it on video, we were too busy laughing. 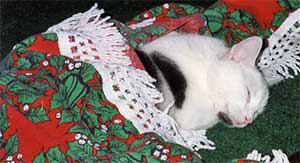 Don’t let his pose fool you …he was anything but an angel, except to me.  He was my little boy and every night he would put his head on my shoulder and heave a big sigh.  He was very special to me and I will miss him deeply. 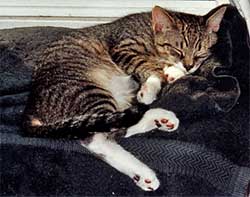 I have been blessed with pets who have an over abundance of personality.  This one was no exception.  He lived up to his name in spades.  He was known to go into purses and help himself, coarse he never went for the valuables, just stuff like gloves and scarves.  He was also my main  hunter …the only ones that were glad to see him pass were the mice. 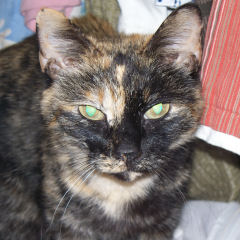 She arrived with Patrick a Ferrel and left one who cuddles.  She stole my heart.