The Strange Steps of Mesoamerica 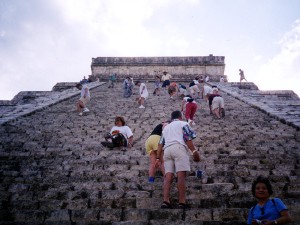 Ancient structural anomalies are evident in almost every region of the world, including its oceans and seas. These structures testify to great civilizations with construction technologies that can neither be rivaled, nor even explained by our supposedly advanced knowledge. Monoliths of great size and incredible structural perfection dot the globe dated back to an era when neither the tools, the skills, nor the mathematics required to build them existed. The archeologists and anthropologists make seemingly impractical guesses about how this was accomplished, while ignoring the glaring realities. If we are not able to duplicate them today; which we can’t, they could not have built them thousands of years ago. This is not some radical viewpoint, this is simple logic.
Each ancient structure has its own set of structural anomalies and many have some very basic anomalous similarities. In the Mesoamerican cultures, the Inca, Mayan, and Aztec peoples, one of the strangest aspects of their monolithic structures are the staircases.

The building of stair cases in construction is not only a basic skill, but a highly regulated one. There are simple rules which are recognized internationally and are consistent throughout the history of mankind. “7 – 11” and “32 – 35” are well known numbers to stair builders.
? The “7 – 11” is the rule for the risers, (height of steps), and treads, the width of the steps. An ideal stair unit will have steps that rise 7 inches from the top of the previous step to the surface area of the next, and the area where the foot actually lands should be about 11 inches. There are slight variances in these ratios, expressed in 1/16th of an inch terms, which are allowed, but the rules are strictly enforced. Build it differently and you will be building a new one.

The “32 – 35” numbers relate to the pitch or angle at which the stair unit rises, expressed in degrees of incline. Stair unit angles between 32 degrees and 35 degrees are acceptable for normal travel, but radical variances are seldom permitted, without careful consideration to safety. In fact, the whole code structure, related to stairs, is in place for safety of the people who climb them.

Other safety considerations include stair rails and landings. Safety rails are required for any stair unit over 30 inches high, 2 1/2 feet, and a landing, a wider space to stand and rest for the elderly, etc., should be placed every 12 steps.

Throughout the lower North American and the Central and South American continents, there are thousands of pyramids, and other ancient structures, with steps that violate every logical method of safe stair building. The “7 -11 Rule” is non-existent with risers as high as 24″ and treads as thin as 6″. Not only are such steps very strenuous to climb, for even a healthy person, they have inherent tripping hazards. Stair unit angles are also very radical. Seldom is an angle less than 45 degrees, with 50, 60, and even 70 degree pitches being common. It is virtually impossible for a human to climb these stair units in an upright position, which poses an extreme potential for backward falls, and the reason why the 32 – 35 degree codes are in place. There are no stair rails and stair units as high as 300 steps with no landings exist.

One structure, or even one culture, with such radical practices, might be understandable. But, most structures, in several cultures, having the same anomaly becomes a pattern of purpose; meaning, they were built that way for a reason. And, unless the reason was to insure a high percentage of serious injury and death, it has nothing to do with human physical realities. In other words, they were not built by humans or for humans. Too high, too thin, too steep, and too dangerous makes that conclusion too obvious to ignore.

We are left with a dilemma; stairs, not built for humans, but stairs, none the less. And, these mysterious construction anomalies have another strange aspect evidenced in their side-to-side width dimensions. A normal width for a relatively low traffic staircase in a home, for instance, is 3 feet, which will allow two-way traffic, with little discomfort. Almost all the staircases throughout the Mesoamerican cultures are amazingly wide; 50 to 100 feet or more, in some cases, with relatively little occupancy space at the top.

Fortunately, a picture is worth a thousand words and there are literally thousands, if not millions, of graphics available depicting the amazing structures of Mesoamerica. And, because of their bizarre nature, many of these graphics have been focused on the anomalous staircases built into the design of those structures. We present some of those images to demonstrate the point that they obviously were not built by or for humans. We first present graphics with the best representations of this reality; people actually attempting to ascend and descend them, or taking a well-deserved break in the attempt. This section also displays the graphics, which show the radical steepness of these staircases. We then present a wide-ranging collection of graphics to show the extent of this anomaly throughout the Mesoamerican regions.