Paul and Jesus: How the Apostle Transformed Christianity

In this “compulsively readable exploration of the tangled world of Christian origins” (Publishers Weekly), religious historian James Tabor illuminates the earliest years of Jesus’ teachings before Paul shaped them into the religion we know today.

This fascinating examination of the earliest years of Christianity reveals how the man we call St. Paul shaped Christianity as we know it today.

Historians know almost nothing about the two decades following the crucifixion of Jesus, when his followers regrouped and began to spread his message. During this time Paul joined the movement and began to preach to the gentiles. Using the oldest Christian documents that we have—the letters of Paul—as well as other early Chris­tian sources, James reconstructs the origins of Christianity. He shows how Paul separated himself from Peter and James to introduce his own version of Christianity, which would continue to develop independently of the message that Jesus, James, and Peter preached.

Paul and Jesus illuminates the fascinating period of history when Christianity was born out of Judaism.

James D. Tabor is Professor of Christian Origins and Ancient Judaism in the Department of Religious Studies at the University of North Carolina at Charlotte where he has taught since 1989. Previously he held posts at Notre Dame and William and Mary. He holds a Ph.D. in biblical studies and early Christianity from the University of Chicago and is an expert on the Dead Sea Scrolls and Christian origins. 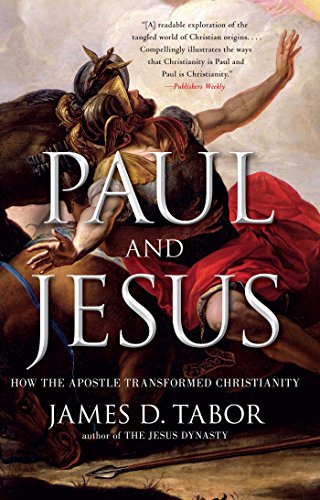